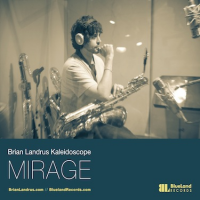 Thus far, every recording by low-end multi-reed artist Brian Landrus has been refreshingly different. The NEC grad burst on to the scene a few years back with Forward (Cadence Jazz Records, 2008) a richly textured free-leaning acoustic jazz album created with a large ensemble of seasoned jazz veterans such as pianist Michael Cain and drummer Bob Moses. His subsequent release, Everlasting (CIMP Records, 2009), a quartet date with Moses and bassist John Lockwood also had free-bop tendencies.

Traverse (Blue Land Records, 2010), featured a different quartet with Cain, bassist Lonnie Plaxico, and drummer Billy Hart and emphasized Landrus' work on the modern mainstream side of the coin. Perhaps the biggest curveball was Capsule ( Blue Land Records, 2011), where Landrus led a plugged-in and very funky quintet. Given his early background playing for various Motown artists, and his recent work with Esperanza Spalding, Landrus' soft spot for electric jazz is perhaps not such an odd thing. Yet, with Mirage, Landrus shows that he's not through surprising us.

Leading a revamped version of his electric quintet, Landrus has added a string quartet to the mix. While it doesn't hurt that the always- scintillating Mark Feldman is amongst the denizens of Landrus' string department, Landrus and conductor Ryan Truesdell consistently manage to bring out the best in both groups; creating interesting harmonic tensions and hooky contrapuntal movement without getting too intellectual.

Though many associate strings in jazz either with the self-consciously avant-garde Third Stream movement of the late 1950s, or with heavy- handed producers looking for an audio "sweetener" to beef up the sound for greater commercial appeal, there have been quite a few noteworthy- -even great—jazz albums that featured string ensembles. Aside from the obvious choice—Bird With Strings (Mercury Records, 1950)— several examples leap to mind: Arthur Blythe's Basic Blythe (Columbia, 1987) is at the top of the heap, along with McCoy Tyner's Fly With The Wind (Milestone, 1976), Steve Kuhn's self-titled album from the early 1970s (Buddha, 1971), and Swiss bassist Stephan Kurmann's ravishingly beautiful album Strings (TCB Records, 1988).

Mirage has much the same flavor, though it's coming from a completely different direction. Ostensibly a fusion album, along the same lines as Landrus' previous release Capsule, Mirage represents the next logical leap in the young saxophonist's burgeoning musical career. While Landrus' knack for distinctive-yet-simple melodies remains intact, the tunes on Mirage aren't simply blowing vehicles for the leader and his formidable band. Here, the strings are almost equal partners, bringing a sleek intelligence and an element of lyricism to Landrus' music; emphasizing aspects of his compositions that would normally be lost in a typical small group setting. At their most imaginative, as on "Sammy," the string arrangements lift the music up to another level, adding layers of drama and darkness.

Another thing that works here are the contrasting textures wrought by the very proper and formal-sounding strings against the seat-of-the- pants syncopations of the unabashedly funky rhythm section. Drummer Rudy Royston's performance is white hot with joy and gleeful energy, while Plaxico's bass hews towards understatement, creating a truly remarkable rhythmic tension that persists throughout the album's twelve diverse pieces. "I've Been Told" explores the intersection of reggae and funk, while the gospel-infused "Don't Close Your Eyes" swims slowly on a strong undercurrent of the blues. "Three Words" also dabbles in the blues, although a distinct R&B feel emerges during the tune's sunny bridge.

Naturally, improvisational sparks aplenty fly on up-tempo pieces such as "Arrival" and "The Thousands," the latter featuring Plaxico's exceptional bass solo. Landrus is a patient, non-licks-playing soloist with a lush sound on a dizzying array of low reeds who is palpably attuned to what's going on around him. The album-closing "Kismet" is as profound a piece of unaccompanied solo saxophone as any I've heard in the past few years.

Pianist Frank Carlberg and guitarist Nir Felder are both cut from the same cloth. I've raved repeatedly about Carlberg's playing in the past, and his efforts here are no less notable, whether he's playing the Rhodes or the acoustic piano. Felder is, in a way, the album's featured soloist—he gets the spotlight on nearly every track. He's got a quick-witted, mercurial musical personality and is one of those rare musicians who's forged a readily identifiable sound at a relatively young age.

On paper, the combination of jazz virtuosos playing funky fusion backed by a string section might not seem all that appealing. Think again. Mirage definitively proves otherwise.