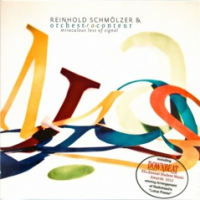 Reinhold Schmölzer is a vivid impressionist, a trait he makes evident as a composer, arranger and drummer on his debut, Miraculous Loss of Signal. He is as eloquent in his writing as he is in his arrangements, letting his Orchestraconteur express itself in all its majesty while opening the door for soloists, who go out on trails that are free, yet stay within the compass of the tunes which can weave in and out of idiomatic patterns. The result is a recording that mystifies, stuns and soars on the wings of its inherent beauty.

Schmölzer paints vivid portraits on "A Forwaholic's Passion Part 1" and "A Forwaholic's Passion Part II." The two must be seen in tandem; it's a continuum that rattles expectation from the moment full-blown ensemble lines in "Part 1" transmute to the linear quietude of the reeds on "Part 2." It is from this juxtaposition that a somewhat eccentric, coiled, limber progression rises, as linearity soothes and comforts, cragginess disrupts the mood and then elevates it, making for a hypnotic experience.

"Lotus Flower" has a pliant intro that gets its pith in swirling instrumentation. This is a more open tune with the big band sound leavened by improvisations that keep form at bay. The sputtering of trumpets, the grate of reeds and the deconstruction of chords are set against quick interjections of piano and wafting layers of cymbals. Exploration is halted by lush orchestration, the music now finding a symmetrical allure. The horns sing gloriously, with the trombone taking a leading voice, punctuated by lithe drumming that keeps the rhythm spry.

The music positively glows. Schmölzer knows how to evoke moods and turn them on to make an impact thus creating a document that heralds the advent of an exceptional musician.