Minus the Bear at Best Buy Theater 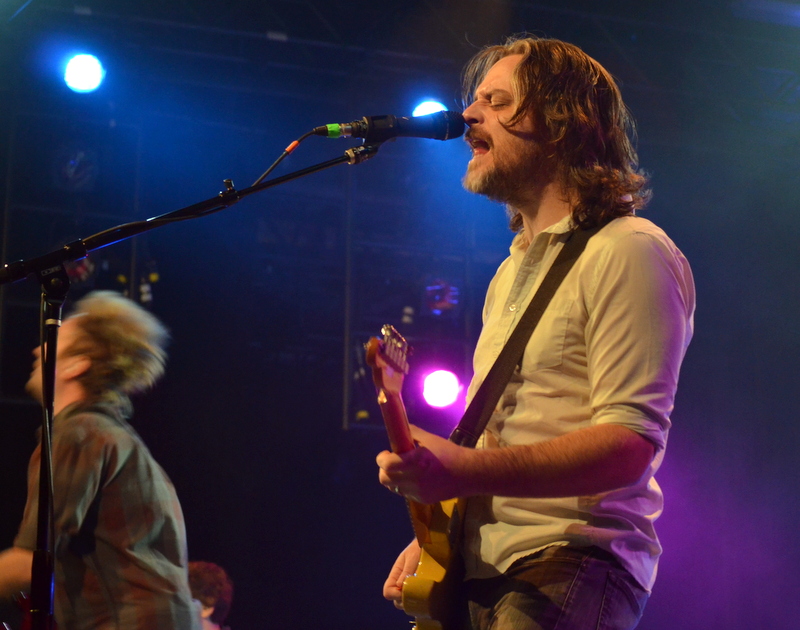 A few hours before taking the stage at the Best Buy Theater in midtown Manhattan, three members of Seattle-based rock band Minus the Bear sat in a high rise in Chelsea at the Livestream studios to engage in a session of questions and answers with fans, as well as playing a few songs live. Lead singer and guitarist Jake Snider's easy way and quick wit were evident, though he admitted to a fan, who cyber-chastised him for chewing gum while singing, that it was to help keep his mouth from getting dry, belying perhaps slight nerves. Snider fielded clever questions as they scrolled in on a screen in front of him while Dave Knudson, guitarist, and Alex Rose on synth were stationed slightly behind, and the banter among them flowed like a team of friends. From noting their love of Chinese food, extolling the virtues of crunchy vs. smooth peanut butter and even tackling a query from a fan who asked if they would prefer to fight 100 duck-sized horses or one horse-sized duck, the 45-minute session featured an inspired version of "Riddles" from their latest release Acoustics II (Suicide Squeeze, 2013). When asked about how they maintain their creativity, the often-touring musicians responded that it isn't always easy.

"Being creative is work, you know," said Snider. "You stay creative by being active and playing music. Everything you play helps you play something different, helps lead you to the next point. If you wait for creativity to strike, I think you're going to sit there for a long time."

Added Knudson, "It's all evolution and keeping your mind in that space. Sometimes when we're writing a record, setting a deadline inspires creativity. Nothing like creativity under pressure."

This creativity, a gift to fans, was evident at the Best Buy Theater when they were joined onstage with the other members of the band, Cory Murchy on bass and Erin Tate on drums. After substantial sets from openers INVSN from Sweden and Seattle-based Slow Bird, the crowd was treated to the main act and primary reason that most were there. It was a Friday night and the enormous digital clock that perched high above the band on the side of the stage read 10:22 when the first strands of "Burying the Luck" rang out.

They were in NYC to support Acoustics II. Released in September, it was a crowd-funded project, utilizing PledgeMusic to allow fans to pre-order the CD or vinyl as well as to offer compelling incentives like a signed vinyl test pressing, a private Skype guitar lesson with Dave Knudson, or a disposable camera with photos in it from the band. Containing eight deconstructed, re-imagined tracks plus two new songs, the project was funded well before the deadline. This year, they have crossed the US in late winter, over to the UK in the spring and back to the States starting in September to support this project, with fully powered electric shows that feature a mini acoustic set.

With minimal banter to the crowd, Minus the Bear played off the amped up energy in the venue, feeding the fans hits old and new. They were here to play. "Lies and Eyes," "The Game Needed Me," and "Dog Park" were met with raucous applause and cheers. Knudson, a frenetic whip of energy, bounded from the edge back to the drum kit, his signature head-bobbing style in full force. Murchy, unbridled on bass, was a powerhouse to behold as he commanded his portion of the stage with masterful precision. A joy to watch, and sounding every bit as formidable behind the mic as he does in studio recordings, Snider is a chameleon whose look changes every time the band hits town on their prolific touring dates. Tate capably kept the beat going on the drums from the back of the stage for "Get Me Naked 2: Electric Boogaloo," "Into the Mirror," Dr. L'Ling" and "Steel and Blood." Rose, a wizard on the synths and sax, added just the right mix to the sound, with the end result a tight musical unit that had the audience in the general admission pit dancing all night.

"Absinthe Party at the Fly Honey Warehouse" was part of the small acoustic set, with Snider sitting on a stool to perform that portion. He introduced the next as a new one, going into "Riddles" and finishing off the acoustic portion by announcing, "And now we're back and going to play some electric songs." "Broken China," "My Time," "White Mystery," "This Ain't a Surfing Movie," and "Knights" were welcomed as well as the encore of "Women We Haven't Met Yet" and the iconic "Pachuca Sunrise." As satisfied fans made their way out of the venue onto the cold street outside, banter wondered what is next for the band. After another busy year, one can only hope that a nice holiday break for the band who gives so much to their fans will be followed by a sneak peek into the next project that captures their creativity. Maybe fighting one hundred duck-sized horses will be in order. Or at least might be the inspiration for a new song.

About Minus the Bear