By GLENN ASTARITA
October 12, 2018
Sign in to view read count 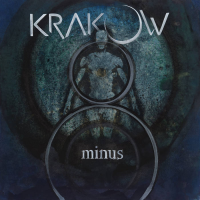 Billed as a Stoner Metal band, Krakow is a quartet from Norway, which is a region that has rocketed into a progressive rock and progressive metal mecca, especially when considering the upsurge in young artists who seemingly learn from the masters and who are intent on cultivating distinct musical personas.

With its fifth release, Minus, Krakow merges psyche rock with doom metal and spaced-out textures, but if you're heavily into song lyrics then you may need to follow along with text, since these vocals more or less mixed behind the instrumentation. However, these aspects are relatively common for Stoner Metal outfits, where soundtracks relating to interminable voids or social breakdowns, for example, may provide the underlying thematic configurations. All in good fun, as some would say.

This ensemble renders hardcore metal with gruff, or perhaps demonic vocals by bassist Frode Kilvik and guitarist René Misje, riding atop Black Sabbath-like volume, although they occasionally lower the temperature to a simmer during wistful treatments. Other movements feature the vocalists' plaintive cries atop drummer Ask Ty Arctander's crackling backbeats and the crunching chords dished out by the two guitarists.

ADVERTISEMENT
"The Stranger" is a brash medium-tempo rocker with hallowed soundscapes, modeled with echo, reverb and the guitarists' heavy distortion riffs and howling leads, but when they descend back to earth the ominous vibe winds down. "From Fire" begins with Arctander's steady groove, amped via his booming bass drum as phased guitar lines form the melody, leading to more of a prog rock aura, complete with heavyweight riffs and dreamy trance-like statements. Here, bassist Kilvik revs up the blaring wall of sound with fuzz-bass techniques amid the guitarist's barbaric chord clusters. Yet "From Stone" leans a bit towards a wraithlike schematic, built with stark imagery and a brooding, psychedelic motif with the drummer's rolling patterns and either vocalist's roaring backdrops. Hence, the musicians seem to be communicating with the spirits of destiny throughout these luridly executed sound designs. Play it Loud!

Black Wandering Sun; Sirens; The Stranger; From Fire, From Stone; Minus; Tidlaus.