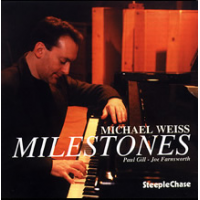 One of many yeoman New York musicians who goes about his work without much fanfare, pianist Michael Weiss is certainly one of the city's finest despite his low profile. Since 1981, he has been an active jazz educator and musician who has spent time with such masters as Art Farmer, Johnny Griffin, and Junior Cook. With only two previous albums under his own name available (one for Criss Cross and another for DIW/Disc Union), the release of this new SteepleChase disc is a valuable addition to Weiss' catalog. A modest trio affair with bassist Paul Gill and drummer Joe Farnsworth (both currently backing singer Diana Krall), Milestones easily qualifies as an excellent example of the art of piano trio jazz.

A set of standards provides the fodder for Weiss and crew, with the debut of Jackie McLean's "Walter Davis Ascending" thrown in for good measure. Jobim's "Wave" receives a most venerable and engaging makeover, with Farnsworth's supple Latin groove providing a charged impetus for Weiss' string of incendiary choruses. Kenny Dorham's "Buffalo" also proves to be an astute choice for investigation with Weiss laying down the blues with aplomb. Both McLean's "Little Melonae" and "Just One of Those Things" provide high octane bebop and further proof that Weiss is a multi-talented player capable of undertaking any style or genre.

Contributing to the overall success of this affair are the efforts of Gill and Farnsworth. The former is surely one of the brightest of up-and-coming bassists, while the latter has already caught the ears of anyone in touch with the current scene due to his highly musical and complimentary drumming. If there's one disappointment, it might be that the other standards are not quite as creatively altered as the aforementioned highlights, allowing a touch of sameness to creep in towards the end of the disc. That aside, however, there's enough engaging material here to more than push this one over the top and send it off with a solid recommendation.