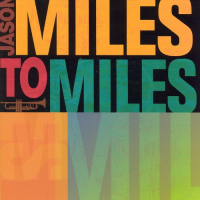 Jason Miles has a wealth of experience and expertise in an area that is often under-appreciated. Synthesizer programming may not seem as significant as the folks who play the instrument, but the truth is that the wealth of programmed sounds for a recording can ultimately determine how contemporary-sounding and, equally importantly, how timeless it will become.

Take Miles Davis' Tutu. While some of the compositions have gone on to become synonymous with Davis' last period, gaze back at the recording twenty years later and, while bassist Marcus Miller's compositions continue to be mined to this day (mostly by Miller, mind you), the textures of the recording sound, well, dated. On the other hand, Miles' programming work on saxophonist Michael Brecker's '90 recording Now You See It...Now You Don't seems to have better weathered the passage of years.

But it's difficult to know how any sound will stand the test of time, and maybe it has to do as much with how heavily they dominate the proceedings. The Fender Rhodes, one of the mainstays of the '70s fusion era, has gone in and out of fashion; even the venerable Hammond B3 organ has experienced times of disfavour. And so, for an artist like Miles, whose instincts for sound are perhaps more key than his abilities as a player, it becomes about more than just creating new textures; it's about finding ones that are somehow fresh and, at the same time, organic enough to avoid the fickleness of fashion.

With all the attention being paid to Miles Davis' '70s electric work, it should come as no surprise that someone so intimately involved with Davis' last studio recordings should extrapolate what he might sound like today, had he lived and continued on in the same direction, and so with Miles to Miles we have an album where groove and ambience supersedes compositional depth and harmonic complexity.

"Ferrari," with its deep groove and thickly-layered approach, sounds very much like an outgrowth of Tutu -era Davis. But Miles' arsenal of keyboard sounds feels somehow more natural here, even as DJ Logic supplies turntables that may or may not date the piece ten years hence. On the other hand, the bouncier rhythm of "Butter Pecan" feels more like something Steely Dan might write. "Guerilla Jazz," featuring the late Bob Berg on tenor saxophone and Karsh Kale on tablas, returns to darker, more ominous funk, while the one actual Miles Davis composition on the disc, "Flamenco Sketches," gets a sonic update that only partly works, mainly because its more imposed structure is so at odds with the free spirit of the original.

As good as Tutu and Amandla were, they suffered from a lack of group cohesion, the result of a large revolving cast of characters, and a similar problem exists here. While Miles has created a pleasant album with more than enough appealing rhythms and ear candy to go around, at the end of the day Miles to Miles is nothing more than an expertly constructed confection, significantly more style than substance.

Visit Jason Miles on the web.