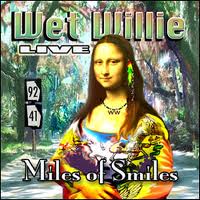 On Miles of Smiles, the reconstituted Wet Willie displays all the effervescent vigor of its previous concert discs Drippin' Wet (Capricorn, 1973) and Left Coast Live (Capricorn, 1977). In fact, the group sounds more authentic than ever, based on the maturity of musicianship displayed here.

Recorded with a current lineup including original members vocalist/saxophonist/harpist Jimmy Hall, brother bassist/co-producer Jack Hall and vocalist Donna Hall Foster, Wet Willie wastes no time digging into a groove for itself on "One Track Mind," where the good humor at the heart of its music is as evident as the deep pocket dug by bassist Hall and drummer T.K. Lively. These performances from August, 2011 in Woodstock, Georgia follow a formula similar to the original band's studio work and live releases by alternating originals and readily-recognizable roots tunes.

To this day though, Willie remains too naturally high-spirited a band to go through the motions, so while "She Caught The Katy" appears early in the set list, the group doesn't belabor its familiarity. Nor does the group overdo other selections from its original discography, including "Country Side of Life," "Leona" "Lucy Was in Trouble." Even its signature tune, "Keep On Smilin,'" isn't the longest cut on Miles of Smiles, only the understandable—but nowhere near predictable—conclusion.

Jimmy Hall is as irrepressible as ever in his song introductions, but more importantly in his deeply-felt vocals. Over the years, his voice has acquired a gravelly texture that suits his abandoned delivery. It also makes for a more effective contrast than ever with the female vocalists who, in a gesture of restraint the likes of which has always earmarked Wet Willie, only appear late in the sole ballad here, "Same Old Moon."

The sounds of Hall's horn and harmonica atill remain indispensable to the current Wet Willie sound. "Street Corner Serenade" sounds like it features a horn section, when in fact it's the single sax fortified by keyboardist Bobby Mobley's instruments. Quick and dirty intervals of harp wailing appear throughout the nine slinky minutes of "Rendezvous with the Blues," drawing sharp contrast with the crisp electric piano and, again, a supple exercise in rhythm by bassist Hall and Lively (who joined the band back in 1978).

Miles of Smiles makes for a judicious comeback on behalf of a band that refused to fall easily into the category of "Southern Rock." Virtually the only Capricorn Records act that did not owe any stylistic debt to Allman Brothers Band, Wet Willie forged a fusion of R&B, gospel and soul music that was all its own during its heyday, and the confidence with which the group originally forged its own personality back in the 1970s remains in full-flower on Miles of Smiles Live.