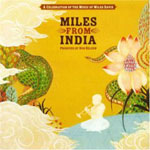 Miles Davis' electric period is his most controversial among critics and most divisive among listeners. Since Sony started reissuing complete session box sets (2001's In a Silent Way, 1998's Bitches Brew, 2003's Jack Johnson), however, reassessment and reconsideration have helped to broaden the respect and enjoyment of the originals. By the time of 2007's Complete On the Corner Sessions, the Davis band's character had become defined by Michael Henderson's non-jazz, steady bottom-heavy bass and psychedelic Hendrix-influenced guitar from Dave Creamer, Reggie Lucas and, ultimately, Pete Cosey.

Miles had used electric bass before and guitarist John McLaughlin had been a key collaborator for years, but On the Corner introduced Indian tabla and sitar into the sound. This is the thread that is picked up by Miles From India, an ambitious, sprawling, intercontinental gathering (helped along by digital file sharing) of over thirty musicians, roughly equally comprised of major Davis alumni and Indian classicists. The sessions are not only focused on Davis' later period. Three songs off Kind of Blue (Legacy, 1959) supply the most startling departures. The familiar melody of "So What" is carried by voices, "Blue in Green" adds violin to its lead voices and "All Blues" substitutes sitar for trumpet. It's all a bit unrecognizable and somewhat odd.

Later, looser compositions work better. "Great Expectations" puts Marcus Miller's bass clarinet over pulsating rhythm, accented by sitar and Wallace Roney's trumpet. Henderson lays down a syrupy bass line on a version of "Miles Runs the Voodoo Down" that presents a sharp solo from Cosey and Roney conversing with the tabla-like ghatam. A second version of "Ife" brings these players together with saxophonists Dave Liebman and Gary Bartz and tabla player Badal Roy in a successful On the Corner-style reunion. The sessions close with John McLaughlin performing his lovely, gentle title track backed by electric mandolin, piano and vocals. Equal parts elegy and homage, it serves as a testament to Davis' musical expansiveness and influence on musicians around the globe.

CD1: Spanish Key; All Blues; Ife (Fast); In a Silent Way; It's About That Time; Jean Pierre. CD2: So What; Miles Runs the Voodoo Down; Blue in Green; Great Expectations; Ife (Slow); Miles From India.