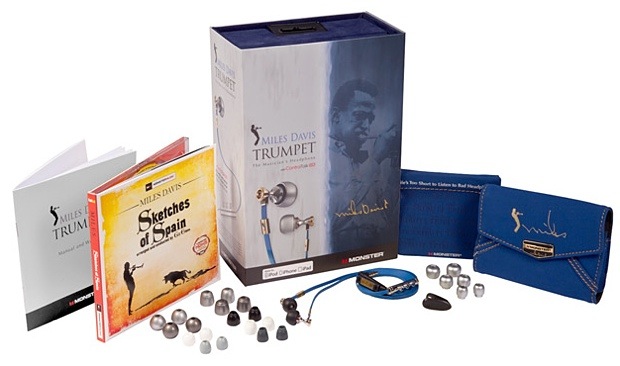 By JOHN KELMAN
December 24, 2011
Sign in to view read count
When Monster Cable launched the Miles Davis Tribute In-Ear Headphones in 2009, it redefined just how good a set of in-ear buds could sound...and how comfortable they could be. Still, priced at nearly $500 US, the product was aimed at a very specific demographic, a target made even clearer by the limited edition nature of its launch; only a certain number of the headphones were manufactured, lending them an exclusivity to tie into other products aimed at a high-end market, such as Sony's Genius of Miles Davis Collection (2010), which collected all of the label's metal-spined (for the most part) box sets in a special case designed to look like the late icon's trumpet case and priced at a wallet-breaking $700 US.

Two years later, Monster Cable introduces the next in its series of in-ear phones, the Miles Davis Trumpet High Performance In-Ear Headphones with ControlTalk (TM). With a ticket price of 30% less than the Tributes, what's most surprising about the Trumpets is that they not only meet the quality of their predecessors, they actually exceed them, with a number of significant new features.

For one, while the Tributes were, and still are, amongst the most comfortable general-purpose in-ear headphone on the market (surpassed only by custom-designed, and consequently even more expensive models), the Trumpets, especially when utilizing Monster's SuperTip (TM) ear appliances, are just as comfortable and, because of their design, allow for one thing the Tributes did not: you can actually lie down with your head on a pillow with the Trumpets, making them even more ideal for long airplane trips where, like the Tributes, their noise-isolating quality is so complete that they, in most cases, are actually better than true noise-cancelling products from Bose, Sennheiser and Sony.

Second, if you're hooking the Trumpets up to a later-generation iPod or iPhone, or either version of iPad, you can now control playback with the ControlTalk device located on the cable for the left earphone. Modeled after trumpet valves to keep with the Miles Davis theme, it can take a little getting used to using just three buttons to control volume, pause/restart, forward/backward track selection and scanning, but it's a relatively quick adjustment. There's also an in-line microphone for iPhone users, allowing calls to come in and supersede music playback. With ControlTalk, the Trumpets are an even more practical choice, because if you store your iPhone/iPad/iPod in a backpack, a briefcase or just in your pocket, you no longer need to access the device directly, unless you want to move from the current album, artist or playlist. Again, that makes the Trumpets an even better travel choice than the Tributes.

Third, this time Monster Cable has employed a flat-style cable and an even stronger right-angled jack, making the Trumpets an even more durable 'phone—and that's a good thing, because one thing the Trumpets don't have is the one-time, no-questions-asked warrantee replacement of the Tributes that was certainly a nice add-on for a set of 'phones at their price-point.

But comfort and control aside, how do the Trumpets measure up to the Tributes sonically? Well, with a larger diameter driver that opens up closer to the ear—actually in the ear, as opposed to the Tributes, where the driver was outside, with a small tube feeding the sound into the ear canal—the Trumpets have a larger-than-life sound that suits the broadest possible range of musical styles. While they were certainly nothing less than stellar across the board, the Tributes were designed with jazz in mind, while the Trumpets are not geared for any specific kind of music, though they are certainly still a superlative choice for jazz, with Jack DeJohnette's cymbals crisp and clear on Gateway's Homecoming (ECM, 1995), Joe Locke's vibraphone shimmering on Storms/Nocturnes' VIA (Origin, 2011), and no avoiding the chaotic power of The Necks' Mindset (ReR, 2011).

But the Trumpets' more generalist design also means that Tony Levin's bass can curiously be felt in the gut on Steven Wilson's Insurgentes (Kscope, 2009), while the mellotron of "Raider II" on the Porcupine Tree front man's Grace for Drowning (Kscope, 2011) is just as huge as it is when heard in the air. Paul Simon's layered guitars remain visceral on the title track to So Beautiful or So What (Hear Music, 2011), while his voice is intimate and immediate on the same album's "Questions for the Angels." And Jeff Beck's tasty-toned, vocal-inflected guitar swoops and soars on Performing This Week...Live at Ronnie Scott's (Eagle, 2009).

This is all predicated, of course, on listening to music in either lossless format or with very low levels of compression. Tested on music ripped to iTunes using 320Kbps AAC format, there's surprisingly little loss from the original; certainly more than acceptable when taking into account the need to reduce music's footprint on devices meant for travel. And used for higher end listening, like the PCM stereo mixes found on DVD-A releases like King Crimson's 40th Anniversary Series editions like Discipline (Panegyric/DGM Live, 2011), the Trumpets capture everything with remarkable detail and transparency. 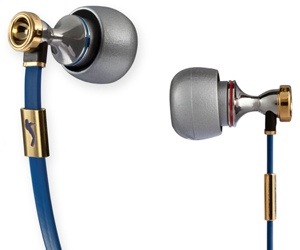 Like the Tributes, the Trumpets come in a large velvet box that also includes two cases, a variety of tips (SuperTips and others) and a built-in housing for the best ones—and, once again, spending the time to find just the right tips is key to getting the most out of these 'phones—along with a shirt clip, an instruction booklet and a new version of Davis' classic 1960 recording, Sketches of Spain (Columbia), remixed for Monster Cable in HDHS (High-Definition Headphone Surround), which manages to make listening to these stereo headphones a surprisingly surround-sound experience.

At $349.95, the Miles Davis Trumpet High Performance In-Ear Headphones still ain't cheap. But with most in-ear headphones designed with a hidden shelf-life—whether it's the cable, the joints attaching to the actual earpieces and mini-jack, or the actual drivers themselves lacking the ability to stand up to the kind of regular and often rugged use/abuse that comes with the territory of portable devices—the reality is that periodically replacing in-ear 'phones for portable players seems to be a hidden cost of ownership. Not so with the Trumpets, which may be expensive on relative terms, but may also be the last set of in-ear headphones most folks will ever have to purchase—until, at least, Monster Cable finds a new way to improve upon them.