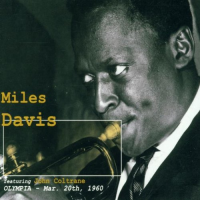 I am going to over-simplify the history of small-ensemble jazz between the heyday of bebop and the vestibule of fusion using a single catalyst—Miles Davis. Davis was instrumental in or the genesis of five major movements (not including fusion) in jazz where the hinges of these movements can be assigned (however arbitrarily) to specific recordings:

Bebop—Davis records "Billie's Bounce" with Charlie Parker for Savoy November 26, 1945. This recording session is among the first Parker made as leader without Dizzy Gillespie. Davis is taking part in bebop's evolution as Parker plants his flag in the ground.

Cool—The Miles Davis Nonet performs Denzil Best's "Move" at the Royal Roost in New York City, September 18, 1948; then commits the piece to shellac for Capitol Records January 21, 1949. Davis' "little big band," in reaction to the excesses of bebop, dissipated bop's frenetic heat in favor of more delicate textures through careful arrangement and orchestration. The West Coast was never the same after.

Hard Bop—Davis and pianist Horace Silver record "Blue 'N' Boogie" and "Walkin'" in Rudy Van Gelder's Hackensack Studio, April 29, 1954. Hard bop was already established by Art Blakey and Silver with their recording of "Opus De Funk" November 23, 1953. What Davis and Silver did with "Walkin'" was to evolve hard bop to its mystic, most punctilious form.

Modal—With what is likely the finest small ensemble in jazz history, Davis recorded "Milestones," for Columbia Records February 4, 1958. Experimentation with this composition led directly to "So What," the opener for Davis' modal coup de maitre Kind of Blue (Columbia, 1959).

Post Bop—Miles in Berlin (Columbia, 1964). September 25, 1964, Philharmonie Hall, Berlin, West Germany, is the first recorded documentation of what would be commonly known Davis' Second Great Quintet. It is this band that would perfect the freer more avant-garde post bop sound developing in Davis' transitional ensembles between 1960 and '64. The definition of post bop would be completed on The Complete Live at the Plugged Nickel 1965 (Columbia, 1965/1995).

Davis' firing of Philly Joe Jones and Red Garland almost immediately after recording Milestones (Columbia, 1958) would lead to a period of split allegiances for Davis, who would record his large ensemble collaborations with Gil Evans while leading the quintet/sextet that emerged from recording Kind of Blue. With the quasi-stable rhythm section of pianist Wynton Kelly, bassist Paul Chambers and drummer Jimmy Cobb, Davis qualitatively had the same quintet with Garland and Jones. However, the John Coltrane that would be joining him again for his 1960 European Tour would be dramatically changed. Free from his heroin addiction and still processing his time with Thelonious Monk, Coltrane was looking well beyond Davis and the present quintet toward his own classic quartet, who would eventually rival Davis in influence and innovation.

The recent Miles Davis / John Coltrane 1960 European Tour document: All of You: The Last Tour 1960 (Acrobat Records, 2014) gave rise to an interest in the present Olympia—Mar 20, 1960. Together, the sets represent all available recorded performances of Davis and Coltrane during their spring 1960 European tour that took place between March 20th and April 10th. All of You: The Last Tour 1960 failed to include the Olympia performances because of apparent copyright conflicts. I hear these recordings as Davis' jumping off point on his way to developing post bop with his Second Great Quintet. The one-two-three punch of Davis' experience with pianist Bill Evans on Kind of Blue, coupled with his experimentation with modal composition and Coltrane's ultimate evolution during this tour firmly pointed Davis in the freer yet tethered direction of post bop.

The present Olympia performances are noteworthy because they were the first stop on the European tour and thus the first exposure of Europe to a very different John Coltrane than expected based on his lyrical playing on Kind of Blue. Davis too was beginning to change his performance style (faster and looser tempi), but has well behind Coltrane, as was the rest of the band. The lengthy "All of You" that opens the release is very comparable to Davis' marathon Prestige recordings of Fall 1956. Davis solos conservatively up to the transition to Coltrane's solo, throwing off sparks as his introduction to the saxophonist. Coltrane begins thing pretty traditionally, but it takes him no time to properly warm up and expel an Avogadro's number of notes and chords. His solo here is more cogent, organized and listenable here than any for the rest of the tour. It can be heard as the beginning of John Coltrane's transformation into JOHN COLTRANE. The conclusion to Coltrane's solo recalls the standard's melody and is met with enthusiasm from the crowd (there was some whistling, construed by earlier writers as discord, but overall, Coltrane sounded roundly accepted).

For the remainder of this recording, Coltrane is improvising vertically while the rest of the groups is searching horizontally. Obviously inspired by Coltrane in the opener, Davis counts off a brisk "So What" and opens his solo with an assertive cascade of staccato notes. He proceeds then to eschew all time and temperature and searches the netherworld for higher harmonies. It is a sound glimpse of things to come from Davis. Coltrane settles into a ritual of beginning his solos with simple lines and then deconstructing and reconstructing these notes and chord in every possible configuration. It is here that Coltrane finds, in the words of Mary Wordsworth about her husband poet William Wordsworth, his head "in paradise."

Standards "On Green Dolphin Street," "Walkin,'" "Bye Bye Blackbird" and "'Round Midnight" all display evolution on the parts of Davis and Coltrane. Kelly, Chambers and Cobb (a jazz law firm is ever) hold down the tradition, tempering these performances, guiding the two principles between the ditches. This will be among the last times that these hard bop giants play hard bop. These 1960 performances are very much hinges on which jazz swings.

CD1: All of You; So What; On Green dolphin Street. CD2: Walkin’; Bye Bye Blackbird; ‘Round Midnight; Oleo; The Theme.