By DAN BILAWSKY
February 22, 2013
Sign in to view read count 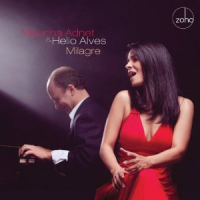 Vocalist Maucha Adnet and pianist Helio Alves have been collaborating in various settings for two decades, but Milagre marks their first full-length recording as a twosome. Adnet, who's best known for her decade-long tenure with the great Antonio Carlos Jobim, and Alves, a first call pianist who's worked with everyone from saxophonist Joe Henderson to cellist Yo-Yo Ma, are both part of a group of close-knit veterans that breath Brazilian air into the jazz atmosphere of Manhattan. This Brazilian jazz mafia, which also includes guitarist Romero Lubambo, bassist Nilson Matta and drummer Duduka Da Fonseca, has served as a binding entity of sorts between Alves and Adnet, which helps to explain the deep bond they've formed over the years. Now, with Milagre, they can finally parlay their shared experiences into a passionate, bare-all project for two.

Together, Adnet and Alves explore Grade A material written by Brazil's finest composers, who also happen to be friends, former employers, and favorites of both musicians. Jobim, Dori Caymmi, Caetano Veloso, Hermeto Pascoal, Moacir Santos, Gilberto Gil, Toninho Horta and several other notables are given their due during this intimate fourteen-song recital. Gentle journeys and energetic fare are both doled out with equal skill as they explore the ins and outs of their homeland's compositional élite.

Adnet's voice is an emotionally powerful instrument capable of firmness or fragility, depending on the situation. When the tempo slows down and the lights are low, she reveals an attractive vocal wave—more a quiver than out-and-out vibrato—that heightens the intensity in her delivery; this level of directness and honesty transcends mere language when it appears. Alves can be called an equal partner here or an accompanist-cum-soloist but, regardless of his classification, he proves to be the perfect pianistic companion for Adnet. He mirrors and amplifies her mood, shades around her lines, creates in-the-wee-small-hours settings or implies the Brazilian rhythmic undercurrents that are usually delivered by the bottom end of a band. When he's given space and free rein to set the scene, he doesn't let the opportunity go to waste ("Vale Do Ribeira").

Adnet and Alves have such an easy way with one another throughout this date so, given their close musical proximity over the years; it's surprising that it took this long for them to get together sans company. Milagre is a long overdue treat.