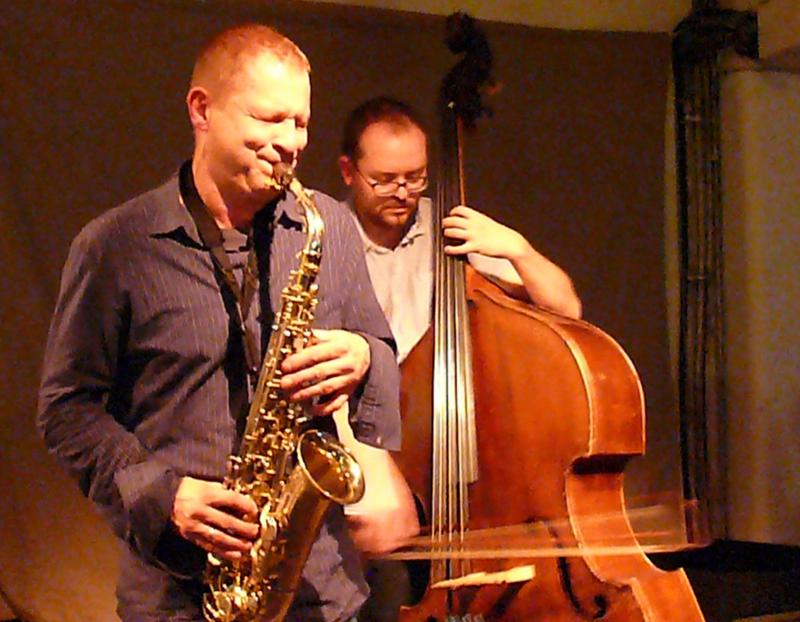 Three for the price of one? How could you resist. London boasts a sizeable Polish population, and it seemed like a large part of them had braved the cool Monday evening to visit Cafe Oto for a visit by Gdansk-born reedman Mikolaj Trzaska. But in a night of unabashed, spontaneous creation, he wasn't all that was on offer. Trzaska has been featured on over forty recordings, dating back to the early '90s, but is only now achieving a higher profile outside his European heartland. This evening he appeared alongside two familiar denizens of the capital's improvised music scene, drummer Mark Sanders and bassist Olie Brice, under the moniker Riverloam Trio. But Sanders, having driven down from Birmingham for the gig, also brought along one of the UK's most accomplished improvisers, reedman Paul Dunmall, to increase the permutations possible across three sets.

Dunmall and Sanders have forged a strong connection, playing and recording together many times over the years, with Deep Whole (FMR, 2008) being just one of the more outstanding outcomes. However their pairing tonight was something else again, being the premiere of a unique duet. Bagpipes have long fascinated Dunmall. He has waxed three albums for solo pipes to date on his own Duns Limited Edition label, and he often gives them brief outings in concert, alongside his more usual saxophones. Having explored the possibilities with Sanders in a studio session on Pipe And Drum (FMR, 2012), there was now the chance to see how this translated into the live arena.

Each time he performs, Dunmall seems to have added another set of pipes to his arsenal. In a thirty minute set he gave a run out to four different instruments, along with a double reed chanter, to amplify both visual and auditory interest. But it was the multiphonics which contributed the edge to what was otherwise a primeval and evocative utterance. Sanders had clearly adapted his style to blend with the unbroken legato stream from the pipes. As such, there was no room here for the subtle mixture of space and tone color play which otherwise forms such a prominent strand in his expression. Nonetheless, their first live showing will be remembered as a singular and enjoyable experience. 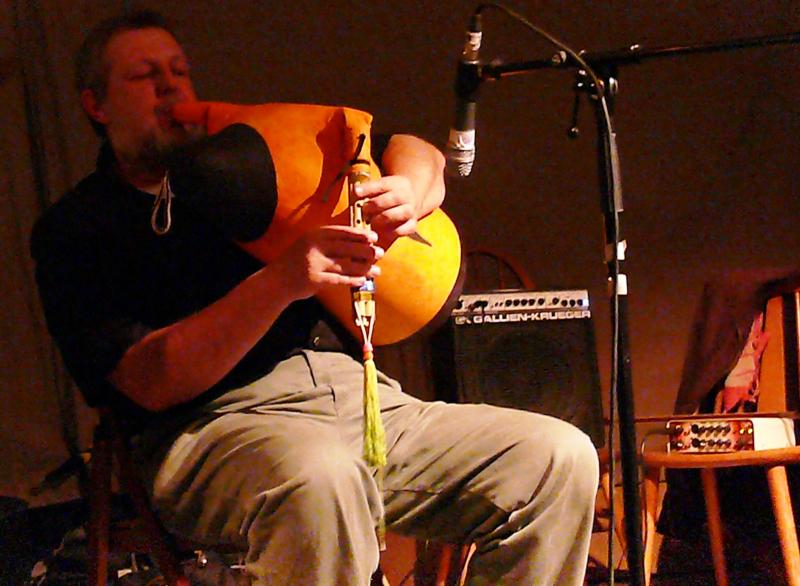 Next up was the Riverloam Trio, on the first leg of a short European tour. Having been together since 2010, the Trio has an excellent calling card available through its eponymous debut, a double LP package on No Business Records (2012). Tonight's show easily lived up to the promise of that document. It was clear that the three men have developed a special bond and a group conception which prizes an almost conversational interaction full of passion, depth and emotion. Together they formed a notably selfless trio, reveling in assured colloquy.

Trzaska announced their arrival with a strident clarion call on alto saxophone, which generated a pithy dialogue with Brice's assertive, anchoring kernels, before Sanders too pitched in. As the intensity levels edged into the red, the Pole became increasingly animated and mobile, swinging his horn up to the ceiling and back down to the floor between his legs in an ever widening arc. He boasted an attractively vocalized, full tone on alto, deployed in clipped phrases to answer and anticipate his colleagues. Tonal distortion intensified the visceral weight of the exchanges. Among the most obvious reference points were reed volcanoes such as Peter Brötzmann and Mats Gustafsson in their less extreme moments, as well as their frequent collaborator Ken Vandermark, similar in his co-option of repeated motifs. But by this stage Trzaska is his own man, not beholden to anyone else.

Brice's purposeful pizzicato provided fluid counterpoint to the saxophonist's cries. At times he exploited the physicality of the strings, letting them thwack against the fretboard to augment the percussive layers in the ebb and flow. But he also indulged in investigation of light and shade, especially with Sanders, unsheathing his bow for some slashing harmonics drawn from the open strings both above and below the bridge, along with more abrasive sawing. Sanders periodically echoed the bassist's bowed squeals, scraping his sticks across his cymbals to create confluences, binding and deepening their flowing improvisation.

In this company, the drummer utilized his full dynamic range, interpolating choppy silence into the collective outbursts. His search for unusual but apposite textures saw him call upon all manner of techniques. Particularly impressive was one section when he used his hand to attenuate the hiss of his ride cymbal without disrupting his flow, even when in full spate. Also noteworthy-at a quieter juncture he placed un-tethered cymbals on his drum heads and drew a litany of striking resonances from them by varying the pressure from his sticks.

When Sanders' bass drum pedal needed repair, Brice and Trzaska filled the gap by opening the second piece with a mercurial duet which gradually moved towards the extremes. The reedman interpolated breath sounds, snuffles and vocal murmurs amid the saxophone blurts. Once Sanders rejoined, the Pole stepped metaphorically into the background by adopting an insistent phrase, while the two Englishman enjoyed a splendid rhythmic interchange. Eventually Brice switched to a propulsive pizzicato which inaugurated a jazzier syntax. Trzaska strode in, working up to a white heat, speaking in tongues, before a slow cadence cooled the flames and led to the final wind down of a revelatory outing.

For the last portion of the evening, Dunmall strapped on his tenor saxophone and joined the threesome for incendiary four-way rapture. Though this was the first time the Englishman had encountered his European counterpart, it was near impossible to discern a lack of familiarity. Both horns phrased in unison, pausing for air at the same time, intertwining and embellishing. Dunmall launched into a fluent spiraling excursion, punctuated by his trademark explosive guttural hollers. As he hit upon a meaty hook, Trzaska plunged in on alto, paraphrasing and rabble-rousing, before allowing the Englishman to continue alone. After Dunmall subsided, the Pole took over in frenetic oratory until both horn men united for an a cappella flight. The interplay between the saxophones (and once, fleetingly, Trzaska's metal clarinet), formed the focal point of the set, as each shifted instantaneously between quarrel and affirmation.

Three excellent sets. However, sometimes it seems more is actually less. The addition of the second horn resulted in less potential for the spacious explorations which had been such a winning trait of the trio. That's not to say that the quartet wasn't an absorbing and exciting event. It was. But rather it served to highlight even more the spellbinding nature of the Riverloam Trio.