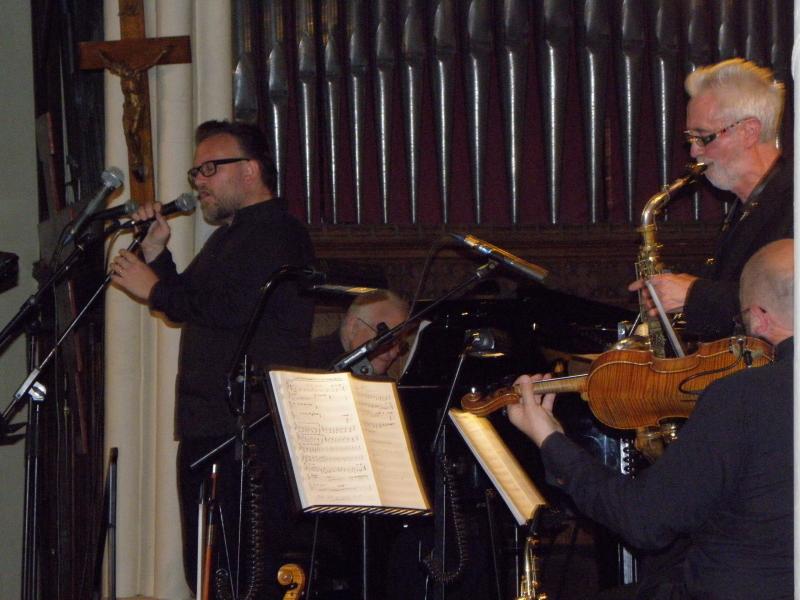 Of all his many achievements, Mike Westbrook's The Westbrook Blake is one of his finest. Few works in jazz have combined music and text, voices and instrumentation, to such profound effect. The settings here of William Blake's prophetic and yet earthly revelations -by Kate Westbrook and the late British poet and revolutionary Adrian Mitchell -have a resonance and relevance that one feels regardless of the vicissitudes of time. Blake's hopes—and Westbrook's—for Albion are a celebration of commonwealth, not those of private affluence and public squalor. They are everything that the UK's 'present' prime minister's vision is not.

No matter how many times I hear Westbrook's arrangement of "Let the Slave/The Price of Experience," the same chills run up my spine. For a moment, I wondered about the slight irony of what Blake himself might make of hearing his words in this mid-Victorian High Anglican church of St. John the Evangelist. But he would surely have appreciated the tribute this implied. In a way, "Let the Slave" itself sums up The Westbrook Blake. Sung with great authority and passion by John Winfield and with a bravura performance from Billy Thompson on violin, its effect could not have been more powerful in the context of an impending election, where once more competing visions of the world were before the populace.

"Let the Slave" lead into Westbrook's recitation of "The Price of Experience"resonance . The accompainment was elegantly simple -Steve Berry's bass, Chris Biscoe on saxophone and Billy Thompson's violin, supported by the collective voices of Kate Westbrook, John Winfield and the St. John's Festival Singers, ably conducted by Christopher Moore. It was as if Blake's words hung suspended in the air, held by Westbrook's music.

The Westbrook Blake opens unsettlingly, almost fractiously with "London Song," here with Chris Biscoe's highly personalised soprano. "Lullaby," sung by both Kate Westbrook and Winfield, could not have been more tender. Following that with "Holy Thursday," beautifully sung by Kate Westbrook, was both shockingly and stunningly appropriate.

"Is this a holy thing to see
In a rich and fruitful land
Babes reduced to misery
Fed with cold and usurious hand
Is that trembling cry a song!
Can it be a song of joy?
And so many children poor
It is a land of poverty!
And their sun does never shine.
And their fields are bleak & bare.
And their ways are fill'd with thorns
It is eternal winter there."

"The Tyger and the Lamb," a feature for the choir over an ostinato bass and piano pattern with keening alto and violin, perhaps offered a warmer childhood vision by way of contrast.

But Blake was also a sensualist, who abhorred self-denial. His poetry as the Westbrooks show deals as readily with the profane as the sacred. The Weill-like, cabaret tango of "A Poison Tree" was given an extended and witty outing by Kate Westbrook and Thompson's violin, with the singer vamping it up big time. "Long John Brown and Little Mary Bell" is the original murder ballad and this reading by Winfield, backed by Thompson and Biscoe on alto, is a blues from the most lowly of taverns. It was great stuff and the audience clearly appreciated the comedy -and the drama -of both performances.

I am an old atheist, unashamedly so. But even as an non believer, I see in the religious impulse of Blake and millions of others, a reaching for something beyond self and beyond a life reduced to commerce. The Westbrook Blake closed with "I See Thy Form," Blake's glimpse of Jerusalem, of the heaven he elsewhere set against "those satanic mills." It was a powerful reminder that Westbrook's art is infused with a strong sense of the pastoral tradition of English music and its connection with the liturgy of the Christian church. His bond with the poet is deeply felt and perfectly realised in the The Westbrook Blake.