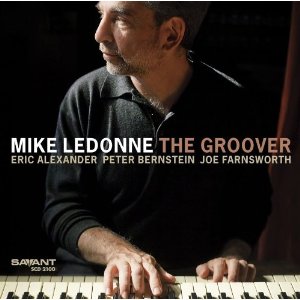 What kind of music "grooves" exactly? Look no further. Hammond B3 organist Mike LeDonne teams with a group of accomplished musicians to put together an album that simply grooves hard all the way to the final chord. Reminiscent of Jimmy Smith and Charles Earland, LeDonne plays with conviction and soulfulness on an album that sounds more like a jam session than a studio release.

From the first few bars, it is clear that the casting of this album is impeccable. Guitarist Peter Bernstein's warm, robust sound blends so well with LeDonne's that at times it is difficult to pick out his playing. Drummer Joe Farnsworth complements all the other musicians well, making this group sound even better than it is. Tenor saxophonist Eric Alexander's focused tone is darkened up a bit for this recording, resulting in a well-balanced palette of tonal colors.

The catchy opening track, "Rock With You," is almost too arranged and could stand to have a bit more of LeDonne's blowing and less of Alexander's backgrounds in the closing minute. Immediately after, the listener is thrust into a tune better characterized as a burner than a groover, "Blues for McCoy," which lets Alexander do what he does best—rip through an up-tempo tune with poise.

The real gem of this album is a simple, child-like melody written by Benny Golson for LeDonne's daughter, entitled "Little Mary." Golson even included an introduction that sounds like music at a carnival, offering a mindset of innocence of joy. As if catching their breath from the last track, all members stay true to the tune and don't get excessively harmonically sophisticated or feel the need to prove themselves. It is very refreshing to hear modern jazz musicians take a simple tune and play some truly beautiful, melodic lines without getting caught up in taking their improvisation outside the changes.

"I'm Gonna Make You Love Me" leaves something to be desired from LeDonne but Bernstein weaves in and out of the straight-forward progression utilizing a tasty variety of articulation and phrasing. Things get slowed down with LeDonne's original "Deep Blue," where Bernstein again shines. His guitar seems to have the ability to connect with the unique characteristics of every tune he plays. This one is the type of mournful outpouring of the soul that comes at three o'clock in the morning, laid back and reflective.

The most progressive and riveting of all the pieces is the LeDonne powerhouse "Bopsolete," which he fearlessly tears through, without the support of Bernstein or Farnsworth, for a sublime minute long adventure. Farnsworth treats the listener to a melodic and well-structured solo before LeDonne and Alexander join together on the finger-busting head to close out the tune. The title track is a shuffle-style LeDonne original that grooves like no other on this album. The patience shown by Alexander and Bernstein shows their maturity when it comes to tasteful improvisation. LeDonne employs a nice mixture of traditional bluesy lines with a modern intervallic approach. Farnsworth and LeDonne find their strongest chemistry on this track.

Closing with a more modern take on "On the Street Where You Live" is somewhat anti-climactic: the track swings hard but doesn't exactly "groove." Regardless, it is a joy to listen to all soloists weave with invention through a more difficult harmonic structure.

This album often comes across like a modern parnership between Jimmy Smith and tenor saxophonist Stanley Turrentine, but with a modern twist. To make it even better, LeDonne got his hands on an outstanding guitarist and drummer to boot. These four musicians recorded previously on LeDonne's "Smokin' Out Loud" (High Note, 2004) and "On Fire" (Savant, 2006). Of the three discs, this is without question the most mature. LeDonne sounds more like a B3 player, and less like a pianist attempting to play B3, every time he records with this group.


Tracks: Rock With You; Blues for McCoy; Little Mary; I'm Gonna Make You Love Me; Deep Blue; Sunday in New York; Bopsolete; The Groover; On the Street Where You Live.