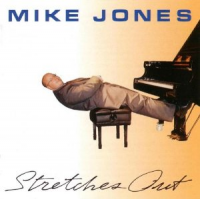 I read while listening to music, as many people do. I read lots of different things: sports magazines, novels, email, psychology research papers. I love to do this, and it isn't often I listen to an album that distracts me from my reading simply by what it presents. This album was an exception, however.

I also listen to these albums as I write their reciews, so if there's a disjointed thought read here...well...forgive me.

Mike Jones is the first Jazz Pianist I have ever really listened to. His style is fun and intriguing. He has an amazing ability to do what seems the work of 2 pianists in one recording session. Not only was I impressed with his playing enough to stop reading, but I was so taken that I would listen to the album at work during the country songs I play on the air. All of this is to say that Mike's album is fantastic. In all of the music I have ever owned (from Big Band to Big Hair Band) I have never read liner notes written, in part, by none other than the famous entertainer Penn Jillette of Penn and Teller. Anyone who enjoys the artistry of a piece well played will turn this album up a little louder, stop what they're doing and just kinda soak it in. This fourth album in the Mike Jones collection is a must-have for piano students who want to hear what can happen when you really love the game.

I Can't Give You Anything But Love; Gone With The Wind; On The Sunny Side Of The Street; Baby, Baby All The Time; Whispering/Groovin' High; Stares Fell On Alabama; Dream Dancing; Tangerine; How Deep Is The Ocean; The Curse Of An Aching Heart.