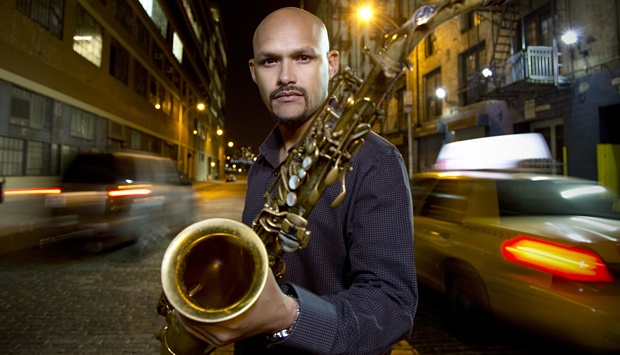 By STEVE BRYANT
June 24, 2013
Sign in to view read count
For the last decade, saxophonist Miguel Zenón has distinguished himself as one of the most innovative and creative musicians in the modern jazz idiom. The Puerto Rican-born altoist accomplished this feat by reaching back to the musical and cultural traditions of his island. On groundbreaking recordings such as Jibaro (Marsalis Music, 2005) and Esta Plena (Marsalis Music, 2009), Zenón paid musical homage to the rich rhythms of Bomba and Plena. Alma Adentro (Marsalis Music, 2011) was a heartfelt tribute to great Puerto Rico composers such as Tite Curet Alonso, Bobby Capo and Rafael Hernandez. The music world was also paying close attention to Zenón,as he garnered several Grammy Award nominations as a result of his visionary work.

In 2008, Zenón received what is perhaps the highest honor an artist can be accorded in this country. He became one of the youngest awardees of The MacArthur Fellowship. In choosing Zenón for this prestigious accolade, The MacArthur Foundation wrote: "This young musician and composer is at once reestablishing the artistic, cultural, and social tradition of jazz while creating an entirely new jazz language for the 21st century."

Not content to rest on his laurels, the ever-prolific Zenón has engaged in several notable projects. He was a founding member of the groundbreaking SFJAZZ Collective, a group whose past and current members include Bobby Hutcherson, Joe Lovano and Joshua Redman. In 2012, Zenón's association with SFJAZZ expanded to include his new role as resident artistic director, along with Bill Frisell, Jason Moran, Regina Carter and John Santos.

Zenón also chose another musical path with the release of Rayuela (Sunnyside Records, 2012), which is based on a novel by Argentinian writer Julio Cortazar and which focuses on the music of Argentina instead of his homeland. Zenón recorded OYE!!! Live in Puerto Rico (Miel Music, 2013) with a group of his old comrades in a packed joint in the saxophonist's hometown of San Juan. The music is a portent of what Zenón is currently up to.

All About Jazz: In following your career, you really have an affinity for the musical heritage of your island. What were you listening to on the radio when you were growing up?

Miguel Zenón: Like most people in Puerto Rico, I grew up with a lot of music around me. In my country, music is very embedded on everyday life experiences and most things that are considered "traditional" are connected to music or to some kind of musical expression. So plena, Bomba música and jíbara as well as salsa and merengue are things that everyone is exposed to in one way or another throughout their lives. I happened to become a big radio listener at an early age. I started with rock music in my early teens. When I was older I went through a big salsa phase, where I was listening to mostly music from Fania Records, as well as Maelo (aka Ishmael Rivera) and Rafael Cortijo. I also listened to Cuban groups like Irakere, Los Van Van, and NG La Banda.

I discovered jazz music when I finished high school, and that was all I listened to for awhile. Some of the recent attempts that I have made of filtering Puerto Rican and Caribbean music through jazz, such as Jibaro, Esta Plena and Alma Adentro, come directly from my experiences growing up in the island. After living in the States for awhile, I was able to relate to these experiences from a different perspective and find an organic and personal way to connect to them through my music. 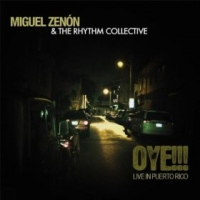 MZ: Actually, in Puerto Rico and most of Latin America, Tite is widely considered to be the most important salsa composer of all time. What he really doesn't get enough credit for is as a bolero composer. When looking for songs of his to cover on the Alma Adentro recording, I realized that so many of his best known compositions were actually slow songs: "Franquesa Cruel," "Mi Triste Problema," "La Tirana," "Puro Teatro" and so many others. I ended up choosing "Tiemblas" and "Temes" for the recording; both were huge hits by Tito Rodriguez and Vitin Aviles, respectively.

AAJ: You work with the Plena Group Viento De Agua and I am also intrigued by with your work with the great sonero (singer) Andy Montanez, who was the lead singer with El Gran Combo.

MZ: I'm very close to the guys from Viento De Agua, and have a lot of respect for what they do. The use bomba and plena music within a modern perspective. I actually played as a guest on a track from their latest release Fruta Madura (Self Produced, 2010) and I'm currently working on an arrangement for their next one. Tito Matos, one of the leaders of the group, is a good friend of mine and was the lead vocalist and percussionist on a recording I did called Esta Plena,. I met Montañez a few years back and have developed a really nice relationship with him and his family. I also played as a guest on his latest release, Sueño (Bis, 2008).

AAJ: You could have taken the easy route of your musical peers and played salsa. What lead you to study and play American jazz? Which altoists do you listen to?

MZ: I discovered jazz music through friends while in high school. Although I had already been studying music for a few years and was already working professionally playing dance music, I hadn't really considered becoming a musician for life until I discovered jazz. I was really drawn in to the idea of improvisation within an established language. A language that also presented a great balance between the brain and the heart, something that was both analytical and heartfelt. The first saxophonist that attracted me was Charlie Parker, but I later discovered other favorites such as Cannonball Adderley, John Coltrane and Sonny Rollins.

AAJ: Rayuela was a definite change of direction from your musical path; What was it about Julio Cortazar's novel that inspired you to make a recording based on the subject matter? What is it about Argentinian music that intrigues you?

MZ: I have been a fan of Cortazar's work for a very long time and Rayuela is probably of my favorite books, one that I've read many times. The book presents a visionary take on form plus a very modern and risk-taking definition of what literature really is. But what really sparked the recording (of the same name) was my interest on a collaboration with French pianist and longtime friend, Laurent Coq. Because the main plot of the book takes place both in Paris and Buenos Aires, I thought that it presented the perfect platform for Laurent (and I to work together. We both wrote music for the project (he concentrated on the Buenos Aires section, I did the same with the section that takes place in Paris), but the music has really nothing to do with Argentinean music per se (or French music, for that matter). Instead, we wrote compositions inspired by our impressions of some of the characters and episodes from the book, which we then translated into the music that was captured on the recording.

AAJ: You are probably one of the youngest MacArthur Fellows in the history of the program. How has that distinction affected you, besides getting that tax free money. What did it allow you to do that you couldn't have done otherwise?

MZ: Receiving the MacArthur Fellowship is an amazing honor, one that affected my life in many positive ways. The main thing that the Fellowship did for me was to give me more freedom in terms of what I wanted to do with my time, gave me more space to focus on the things that I really wanted to do. It also gave me the means to finance certain projects that I was interested on, like a project I started called Caravana Cultural (which organizes free-of-charge jazz concerts in the rural areas of Puerto Rico), plus it helped cover the full or partial budgets of my last five recordings.

MZ: I joined the SFJAZZ Collective on its inaugural season [2004]. I would not hesitate to say that it has been the most important musical experience of my life. Not only has it given me the opportunity to play with some of my musical heroes, like Joshua Redman, Bobby Hutcherson, Brian Blade, Joe Lovano and Eric Harland, I've also gotten the chance to be part of a group that is unlike any other I've ever worked with. We are all commissioned to write music for the group every year, so it functions as a composers' workshop. Then we have a residency period of about two weeks, where we get to rehearse the music before we go on tour.

Being part of the band has been amazing and I'm looking forward to many more years with the ensemble. I've developed a very good relationship with SFJAZZ. For the seasons of 2012-13 and 2013-14, I'm serving as one of the Resident Artistic Directors for the organization along with Regina [Carter], Bill [Frisell], John [Santos] and Jason Moran. Our main responsibility is for each of us to organize a four-night residency each season, where we serve as curators. My first residency just took place at the end of May and it went very well.

AAJ: Are you aware that the Bay Area has a rich Latin Jazz Heritage? Cal Tjader, Pete and Sheila Escovedo and John Santos have been playing Latin jazz out there for a long time

MZ: Sure, I'm aware of people like John, Santos, Karl Perrazo, Orestes Vilató and other greats who've kept the Latin American music scene alive in the Bay Area for many years. I'm also very aware of the long history of jazz music in the area, with legendary venues such as The Jazz Workshop, The Blackhawk, Keystone Korner, and Yoshi's, in Oakland. Now that The SFJAZZ Center is operating, I'm sure things will just keep getting better and better. The San Francisco Bay area is a great place for music.

AAJ: Have you ever played in Detroit?

MZ: I've actually played in Detroit a few times. There's a music series at the Detroit Institute that I've played two or three times, and I played at the Detroit Jazz Festival a while back with David Sanchez and his band.

AAJ: Are the musicians on Oye Live your current working group? What is so special about them?

MZ: The Rhythm Collective first came together as a band in 2003, for a month-and-a-half-long tour of West Africa. The trip was part of a program called Jazz Ambassadors, which was then organized by the Department of State and The Kennedy Center. All the music on Oye was either written for the tour or developed during the trip.