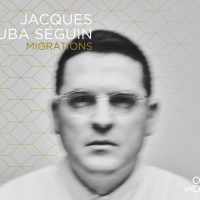 Montreal-based trumpeter/composer Jacques Kuba Sequin's Migrations celebrates people from a wide array of cultural communities in Quebec, Canada. The exploration of those multicultural groups results in Sequin's dynamically sculpted sound that is cohesive, celebratory and anthemic. His investigative interviews of the people he is celebrating here reveal a conglomeration of unabashed optimists, glowing with the joy of life. The music doesn't lie.

The instrumentation—a sort of Modern Jazz Quartet rhythm section—vibes, piano, bass, drums—paints an understated backdrop for Sequin's warm trumpet and Yannick Rieu's gutsy tenor sax. The music is all composed and arranged by Sequin, and he's done a first rate job of crafting a distinctive sound with a start to finish continuity of vision. Jean-Michel Pilc's piano and Olivier Salazar's vibraphone create a softly luminous blur. Sequin's trumpet tone is direct and succinct, and the experience of a straight-through listen of the disc is similar to that of sitting down to a European movie that features soft lighting—sun dappled in the outdoor scenes, sunlight filtered through translucent curtains on the indoor shots.

With Migrations Sequin creates a signature sound, much in the style of that of the late Polish trumpeter Tomasz Stanko, minus the melancholy. "I Remember Marie In April" bounces with a jubilant mood, "Hymne" sings a joyful and pious prayer; and "Premiere Neige (You're Not Alone)" says that everything is going to be alright.

Migrations serves as a beautiful soundtrack to the diversity of the cultural landscape of Quebec—an engaging, first-rate jazz album.