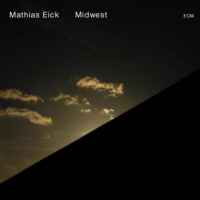 The northern tier of mid-western America had been a strong draw for Norwegians from the late 1800s into the twentieth-century. Trumpeter and composer, Mathias Eick, in making his own recent journey from Norway to the heartland, discovered a cultural heritage and a familiarity that moved him to set the experience to music. Like Norsemen since the time of Leif Ericson, the impressions of the land and the people provided the catalyst for a unique and holistic representation of this environment through art. The young but prolific Eick renders a lushly satisfying pastoral narrative on Midwest.

The excellent pianist Jon Balke, best known as leader of the Magnetic North Orchestra, is much the common denominator among the players here, having worked with percussionist Helge Norbakken and with Eick on his ECM leader debut The Door (2008). Violinist Gjermund Larsen was the first collaborator recruited by Eick based on Larsen's complimentary roots in Norwegian folk music. Larsen's portfolio of jazz, classical and regional folk is filled with stunning performances and inventive compositions and Eick's choice is a critical component in establishing the ethnic feel of Midwest. Bassist Mats Eilertsen has worked with the Tord Gustavsen Quartet while the leader himself has made significant contributions to the works of guitarist Jacob Young, pianist/harpist Iro Haarla, and drummer Manu Katche.

Eick's compositions are ancestral, personal, and deeply felt at that level. He has convincingly channeled the challenges and triumphs of his country's immigrants to America, without sentimentality yet with considerable empathy. The title track paints a picture of the rolling landscape by way of Balke's impressionistic playing with Larsen's folkloric interpretations putting a human face on the settlers themselves. The beautiful and melancholy "Hem" suggests a solidary search for roots in a new land as does "March" but here with an element of celebration at reaching the destination. Likewise, celebratory "Dakota" and "Fargo"—with a reference to the Coen Brothers film—are further tributes to the endurance of the northern plains settlers. They paint both the harshness and unwavering determination of the quest in a beautiful and compelling melodies.

Eick and Balke are the primary soloists on Midwest but the more subtle contributions of Norbakken, Larsen and Eilertsen are critical to the texture and traditional presence of the music; the players are empathetic yet distinguished in their contributions. Eick favors minimalist constructs and otherworldly atmospherics, qualities that are well suited in imagining the theme and mood he has intended for Midwest, a warm album as natural and comforting as going home.