By KARL ACKERMANN
October 8, 2017
Sign in to view read count 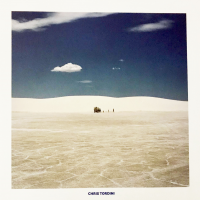 The vinyl-only subscription label, Newvelle Records, enters the second half of its second season with the Chris Tordini Trio collection, Midnight Sun. Bassist Tordini is joined by vocalist Becca Stevens and guitarist Greg Ruggiero on a set of standards bookended by Ornette Coleman covers. The readings here are stripped of any superfluous trappings, allowing the individual performances to stand on their own merits.

Tordini is a much-in-demand bassists having worked with pianist Tigran Hamasyan, John Hollenbeck's Claudia Quintet, Chris Speed and Kris Davis. He is at home whether playing free improvisation, fusion or standards; the latter being the theme on Midnight Sun. Stevens has the kind of malleable voice that is at ease in the avant-garde world of Travis Sullivan's Bjorkestra's I Go Humble (Zoho Music, 2013) or her own Regina (GroundUP, 2017), a blend of jazz and folk influences. Her diverse background includes work with David Crosby and Brad Mehldau. Tordini and Stevens are part of her namesake band as well. Ruggiero is a steady presence on the New York circuit and he has played with Greg Osby, Mark Turner and Jane Monheit.

Coleman's "What Reason Could I Give" from his Science Fiction (Columbia Records, 1972) is a more temperate ballad in comparison to the original, slightly anamorphic version. Charles Mingus' "Portrait," though given a guileless reading by Stevens, has a mysterious, haunted air about it. "If I Should Lose You," like the later "Everything Happens to Me," takes a jazzier turn but even when Midnight Sun swings, it does so gently. Much of what we hear is focused on Stevens' voice and Ruggiero's guitar but Tordini stands out with his solo on Duke Ellington's "Prelude to a Kiss" and on the closing Coleman tune, "Peace"—a bass solo sans vocal.

While each member of this trio has demonstrated their ample ability to generate textural effects and extended techniques, this album takes a minimal approach and is less interested in clever arraignments. That said, the improvising instrument of note on Midnight Sun is Stevens' voice which transcends any self-imposed restrictions that come with translating the national songbook for the modern jazz repertoire. Midnight Sun—with a stunning cover from the Tendance Floue photographic archives—is another winning effort from the Newvelle series.

Side A: What Reason Could I Give; Portrait; If I Should Lose You; Midnight Sun. Side B: My Funny Valentine; Everything Happens to Me; Prelude to a Kiss; Peace.