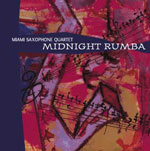 Several things help set the Miami Saxophone Quartet apart from comparable groups: one, the brilliantly textured charts, most of them written by Ed Calle or Gary Lindsay; two, the emphasis on Latin and Hispanic motifs and melodies, epitomized by Calle's three-movement Iberia Suite; and three, the use of percussion on three selections, guest artist Arturo Sandoval on trumpet, flugelhorn and piano, and vocalist Jon Secada on his own composition, "Angel. Midnight Rumba, the third album by the MSQ, celebrates Latin culture and tradition through song, but not exclusively, as there is room as well for Ralph Burns' jazz standard "Early Autumn (featuring Sandoval's flugel), James Taylor's contemporary folk song "Benjamin, and the Gershwin brothers' "My Ship, smartly arranged for the quartet by Pete McGuiness.

The album opens on a fiery note as the MSQ eagerly devours a steaming bowl of Calle's tantalizing, Afro-Cuban-based "Rice and Beans, helped along by percussionists Richard Bravo and Lee Levin. Besides Calle (tenor sax) and Lindsay (alto), the other members of the quartet are Gary Keller (soprano, tenor) and Mike Brignola (baritone). The tempo slows for "Angel, whose lovely melody is enhanced by Sandoval's lithe muted trumpet and impaired by a nearly incomprehensible lyric.

The Iberia Suite, inspired, writes Calle, by "the rich history, beauty and traditions of Spain, begins with "Midnight Rumba, depicting the sultry atmosphere of the streets of Madrid, which come to life at midnight, and continues with the "sonorous serenity of "Siesta before sketching a musical portrait of the city and people of "Pamplona, site of the annual running of the bulls. "I hope, writes Calle, "that the listener will hear conversations among participants and observers, step into a tavern for some 'tapas' and a glass of wine, watch a couple dance flamenco, sense the awesome power of the charging bulls, and feel the exhilaration of a successful run. A tall order, but Calle and the MSQ come close.

The tumult of "Pamplona precedes the lyrical "Benjamin (performed by the quartet alone), "Early Autumn, and two well-known works by Dizzy Gillespie, "A Night in Tunisia, on which Sandoval not only plays trumpet but introduces the piece with an improvised piano solo while the percussionists turn up the heat, and "Con Alma, a feature for Keller's supple tenor, adeptly underlined by bassist Chuck Bergeron. "Autumn is a gem, with the saxophones weaving richly harmonic sound patterns through and around Sandoval's expressive flugel. The graceful "Ship, scored originally for McGuiness's New York Trombone Conspiracy, is ably manned by the quartet alone, as is the late Astor Piazzolla's buoyant tango "Bordel 1900, which neatly seals the package.

Another well-earned triumph for the MSQ, which stares down these formidable charts without uneasiness or pause and handily nails every note. For lovers of the saxophone quartet, a rich and flavorful banquet.

Visit the Miami Saxophone Quartet on the web.