By CHRIS MOSEY
October 3, 2013
Sign in to view read count 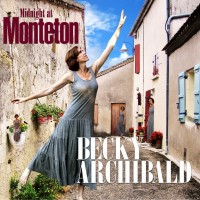 Becky Archibald is an extremely talented lady. Relatively new to jazz, her composing and arranging skills at best warrant comparison with those of such great names as Marty Paich and Mary Lou Williams. Though they are all her own and bang up to date.

A native of Anderson, Indiana, she sums up her life to date in an attractive blend of panache and self-effacement: "Becky Archibald was born, took piano lessons, grew up, went to college, went to grad school, started writing music, made some CDs, won some awards, played in Carnegie Hall, taught kids to compose, played jazz in France, and invented an instrument."

To flesh out this laconic CD a little: she started out in classical music, playing at Carnegie Hall's Weill Recital Hall, and with members of the Indianapolis Symphony Orchestra. She first dabbled with jazz while teaching children at inner city schools how to write music. She later arranged for their compositions to be played at the Indianapolis Spirit and Place Festival.

But her involvement with jazz only began in earnest in 2008 when, thanks to a grant from the Arts Council of Indianapolis, she studied at the Dordogne Jazz Summer School held in a 12th century castle at Monteton, a village in the south of France. Here she became composer- in-residence. This album is a summation of her work in that capacity.

Twelve of her highly original and intriguing compositions are performed by herself and some of the most talented jazz musicians in Indianapolis. The proceedings kick off with the quirky "Deux Chapeaux (Two Hats)," featuring Mark Ortwein's bass clarinet juxtaposed against the sinuous alto of Jim Farrelly.

Experimental? Academic? Not a bit of it. The song, like nearly all Archibald's compositions, is highly melodic, swinging and accessible. Indeed, many of these numbers—the atmospheric "Lemonade" is a particular case in point—could have been written as part of a movie score, the sort of thing Lalo Schifrin did so well.

An excellent album, just a trifle marred by the three solo piano pieces Archibald saw fit to tack on as "bonus tracks." Nothing wrong with them per se but they spoil the continuity.

The instrument she invented? A "cycla-phone," built out bicycle parts during her involvement with celebrations to mark the completion in May, 2013 of the Indianapolis Cultural Trail, an urban bike and pedestrian path.

Deux Chapeaux; Once Is Not Enough; Can’t Let It Go; Lullaby; One-O-Four; Lemonade; If You Only Knew; Midnight At Monteton; Le Tour De Jack; And Then There Were Two; Bullet Proof Blues; Never Alone; Still Something To Say; No Walk In The Park; Anniversary Waltz.