Midge Ure at the Iridium 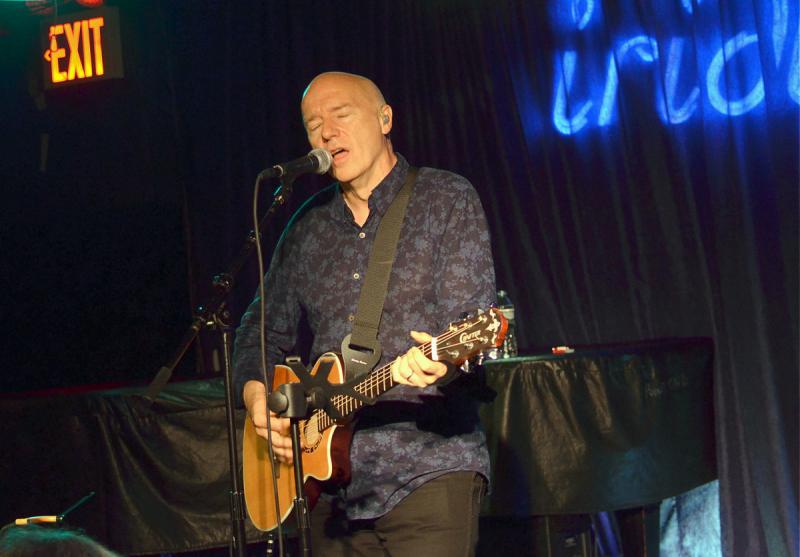 Midge Ure is a Scottish guitarist, singer, keyboard player, and songwriter. He has achieved worldwide success as a member of Slik, The Rich Kids, Thin Lizzy, Visage, Ultravox and as a solo artist. During his career, he has won many awards including a Grammy® while recording a number of gold and platinum albums and singles. Ure is also famous for having along with Bob Geldorf, written "Do The Know Its Christmas?" and for co-organizing Live Aid and Live 8.

Touring behind Fragile (Hypertension, 2014), his self-described first album of new material in 12 years, Ure delivered a career-spanning night of acoustic favorites (along with choice new songs) at a packed Iridium nightclub. Appearing on stage, Ure was clearly in a playful mood. He casually began talking to the crowd as though they were old friends, "How ya doing? Good to see ya! Keep the applause going 'cause I forgot my guitar." He then hit his forehead with the palm of his hand bounded off stage, grabbed his axe, smiled and announced, "It's good to be back."

The audience in the small club, nestled below New York City's famed thoroughfare, Broadway, reacted as if Ure had told each member that they had won a million dollars. The applause was deafening. Once the cheers had died down, Ure opened with "Waiting Days" from Pure (RCA, 1992). He then announced that the next songs "Breathe" was one "that I usually do later in the show, but I've been noticing that my vocals keep getting higher so rather than ruin it I'm going to do it here."

His good cheer and self-deprecating humor was never more evident than on his next interaction with the crowd. In his Scottish brogue he said, " I was in a shop today and the girl told me she loved my accent. She said, ' Don't buy anything; just talk." She got kind of orgasmic. I found it strange because I sound like Billy Connolly, the comedian and actor or better yet Shrek." He paused and in his best Mike Myers impersonation said, "Hey Donkey!" He continued, "Anyway, this is a song I wrote a lifetime ago, but never got around to recording myself. He then played a tour de force interpretation of Visage's "Fade To Grey." Next up was the plaintive and pleading "Dear God" from his second solo album Answers To Nothing (Chrysalis, 1988). The lyrics say it all:

Continuing with his conversational tone, Ure introduced "Become" from Fragile with the statement, "I've got a new album. It was time. Twelve years, so I'm not in a hurry... this is from it. On the album the song is very electronic. This version isn't." After soaking up the applause following the new tune, Ure grabbed his iPad Mini and his glasses. After mounting the device on its stand and donning his glasses, he paused and folded his arms across his chest and over the guitar, he wistfully said, "I recently made a grave error. I said I'd play the entire