By JACK BOWERS
October 4, 2011
Sign in to view read count 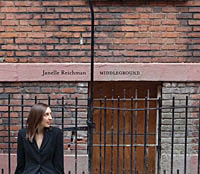 It's a pity that someone as conspicuously talented as Janelle Reichman couldn't prompt at least one bona fide record label to release her remarkable debut, Middleground. But that's emblematic of today's music biz: without a name, talent simply doesn't cut it. While the other members of Reichman's quintet are also nameless—or may as well be—they are no less adept than she, and together they have produced an impressive narrative that swings and satisfies from start to finish.

Besides playing tasteful tenor saxophone and clarinet, Reichman wrote every number save one (Joni Mitchell's pensive "Both Sides Now," which closes the album) and arranged all of them. On tenor, a number of influences can be heard dating back to the Blue Note boppers of the '50s and continuing on through today's mainstream standouts, but Reichman has earnestly absorbed their mannerisms and embodied them into her own singular voice. Emphatic as is her tenor, however, it is her expertise on clarinet ("Middleground," "Safe," "Both Sides Now") that raises Reichman from the level of the merely proficient to the realm of the exceptional. She's the second outstanding clarinetist to emerge recently from within the ranks of the superb all-woman big band DIVA, the first having been Anat Cohen. A decision on their respective merits would be hard to render, as both Reichman and Cohen are among the most resourceful and accomplished clarinetists on today's scene.

Reichman leads a quartet on four numbers, while trumpeter Philip Dizack makes it a quintet on the other seven. The rhythm section (pianist Roy Assaf, bassist Daniel Foose, drummer Anthony Lee) is, as noted, first-rate, even though more or less unknown outside the New York City area. Besides giving Reichman a spacious comfort zone, Assaf solos sharply on "Middleground," "Inspire," "Safe" and "The Move," Foose on "Penumbra," "The Move" and "Paper Angel." As for Reichman, she is a model of charm and consonance throughout, as player, composer and arranger.

A few more sessions like this one and Reichman's name should be well-known not only among her fellow musicians but to the jazz-loving public as well. Perhaps then the record companies will come knocking at her door.