By MARK SULLIVAN
September 24, 2019
Sign in to view read count 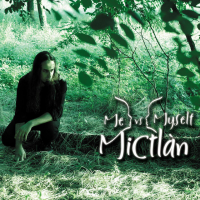 MeVsMyself is the name that Italian experimental vocalist Giorgio Pinardi uses for his solo voice project. It refers to the ancient Aztec representation of the after-life. In this religious concept, all souls explore eight different dimensions after death before reaching their final rest, a voyage reflected in the eight tracks here. Given the inspiration for the project, it should not be surprising that Pinardi draws on a wide variety of vocal traditions from all over the world. The process is fundamentally improvisational, with editing and some small electronic manipulation in the studio after the performance.

"Khnum" opens the album with the sound of a storm in a tropical rainforest: the first of many sounds that do not appear to be generated vocally. Then recognizable vocals enter, a chorus of interlocking vocalise. "Tin Hinam" opens with a chant (which could come from several traditions), joined by bass and treble counter voices. It moves into a rhythmic section, with bass and handclaps. "Gurfa" also features a "percussion" section, as well as sped up vocal effects.

"Sygyzy" has a broad range of vocal effects, including both extremes of register, with low growl sound especially prominent. "Tingo" has some of the most melodic music in the set. "Orhwurm" has a variety of sounds, but a swing vocal section followed by Medieval chant is especially striking (accompanied by what sounds like a low drum). "Eostre" concludes the program with overtone singing and reverse drones, the most explicitly electronic sounds in an album full of surprises.

Pinardi is a remarkable vocalist and improviser: this music sometimes recalls vocalists like Bobby McFerrin, but Pinardi has his own approach. Mictlán is certainly recommended to fans of extended vocal technique, but it offers more than mere vocal demonstration.