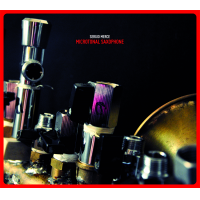 Microtonal Saxophone is the latest in an impressive lineage of innovative and experimental saxophone recordings released by Potlatch. It follows in the footsteps of such groundbreaking albums as Bertrand Denzler's Tenor (2010), the free sax quartet Propagations (2007) and Stéphane Rives's Fibres (2003), among others. Unlike such players, who redefined what could be played on a saxophone or the ways the instrument could be played, Argentine saxophonist Sergio Merce has gone a stage further by radically altering the instrument itself.

His microtonal saxophone is an alto sax from which the original mechanisms and keys have been removed and replaced with an assortment of water, gas and compressed air taps which allow Merce to move the tuning of any note, play microtones and multiphonics. In addition, the combination of circular breathing and a sustain pedal mean he can maintain sounds and overlay several sonic layers. The close-up photographs of the instrument on the album sleeve are fascinating as they reveal its Heath Robinson, steam punk construction and the consequent impossibility of playing it as rapidly as a normal sax.

Merce has been using his microtonal saxophone in concert for some years (see YouTube, below, for an example) but this album is the first recording of it, thus making it a piece of history. Recorded in Buenos Aires in summer 2013, the music consists of four pieces, which range in length from six minutes to over fourteen. Merce has insisted that the instrument is a composition in its own right—he created it as a composer rather than as an instrument-maker. The music supports that contention, as it is often unrecognisable as having been played on a saxophone.

The form of the instrument determined how it is played and, hence, the shape of the music. Central to that are notes which are sustained for long periods—by breathing or electronic means—and subtly altered to create sufficient detail and variation to establish that a human being is responsible rather than a machine. There are just enough similarities with Merce's work on conventional saxophone—such as on Casa (Organised Music from Thessaloniki, 2008)—to confirm that he is the human being in question.

Occasional suggestions of reediness in the sound betray the instrument's origins as a saxophone but those clues are countered by the sound's unsaxlike shimmering quality. On an album that is mesmerising from start to finish, the passages that are most engaging and impressive are those in which Merce overlaid various laminas to give the music greater depth and create the illusion of several players interacting. For one person to have planned and executed that in real time on this instrument seems akin to playing 3-D chess while solving a Rubik cube one-handed.