By NENAD GEORGIEVSKI
October 10, 2015
Sign in to view read count 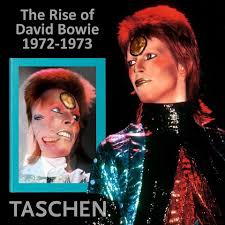 For many years, photographer Mick Rock has been capturing the passion and the energy of some of most distinguished rock and roll artists. Often referred to as the "man who shot the '70s" he has trained his lenses on many artists from Lou Reed, Syd Barrett, Iggy Pop to Blondie, Sex Pistols, Queen and David Bowie, to name but a few. Rock music has had plenty of glorious moment along and Mick Rock was there to capture some of those moments that people talk about even to this day. As David Bowie's official photographer at the start of the '70s he was able to capture his star rising at one of the most celebrated chapters of Bowie's illustrious career—the Ziggy Stardust persona.

In this monograph, his camera follows Bowie from a cult artist turning into a superstar. During the period when these great images were made, Mick Rock was an artist at the top of his game, with intimate access to a cult artist who was also at the top of his game and who was about to step into global stardom. This was a powerful combination which made possible this amazing collection of images, many of which were never seen before. Mick Rock has published several books already including a book with photographs of Bowie titled Moonage Daydream: The Life and Times of Ziggy Stardust (Genesis Publications, 2002) and now comes a second volume, titled The Rise of David Bowie 1972-1973. that also features plenty of previously unpublished photographs.

What began as a simple assignment of doing an interview with a rising star by the name of David Bowie soon turned into him becoming an official photographer for Bowie. It was the period when the watershed The Rise and Fall of Ziggy Stardust catapulted him from a cult artist into one of the most popular stars on the planet. The collection features amazing images which were taken over during a period of 20 months with an access granted exclusively to him as Bowie's main and only lensman. Conceptually, the book's chapters are divided and named after the songs on the seminal Ziggy Stardust record. The theatricality of his performances and the impact of how his otherworldly appearance over audiences were captured masterfully by Rock showing how Ziggy actually fell to Earth. Bowie is considered to be one of the most imaginative artists ever, and at the time when these photographs were taken, he was surely one of the most controversial ones. The photographs feature plenty of behind the scenes moments, including publicity photographs and some quiet moments or celebrated photographs such as the alternative take on iconoclastic images of Bowie with Lou Reed and Iggy Pop at London's Dorchester Hotel.

What makes this collection indispensable are the stories that these photographs tell. Published in a exclusively limited number of copies, every detail about it indicates it's a masterpiece of artistic design. Also featuring is an interview with Rock conducted by renowned journalist Barney Hoskins, which shines a light on the Bowie and Rock moments. Ziggy Stardust was a quintessential rock 'n' roll moment, and these photographs tell the story of an artist in full flight and in the process of conquering the world. Mick Rock was the right person at the right time to witness all of that.