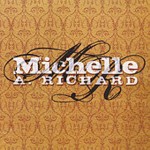 Michelle A. Richard is a young Francophone Canadian vocalist and actor from British Columbia whose imagined musical ancestors could well be Little Jimmy Scott and Mavis Staples. These names are significant and provide an obvious peek into Richard's vocal world: Jazz and blues, to which it is possible to add Acadian roots music. The latter makes for a mildly exotic twist to everything that Richard does. Not just in the stories she tells, but also in the naked folk rhythms that are entwined in the depths of her voice. She sings with a rare ease, always with in a dusky low register of the soprano. Her phrasing is spectacular and her in her wispy, delayed vibrato is a rich infusion of quarter notes that she bends and twirls sensuously in a singularly new and individual voice with a twist of Bessie Smith and Billie Holiday.

On her debut, independently produced, eponymously titled record, Michelle A. Richard, she has brought together a selection of nine songs that only just begin to describe who she imagines herself to be. It is therefore quite a telling story to find that Richard opens the recording date with two exquisite French songs, "Ces Blues dans la Nuit," and "Je Pense a Toi," composed by herself and closes it, significantly, with the Edith Piaf classic, "La Vie en Rose".

"A la Claire Fontaine," the traditional French folksong that was immortalized in the film of a W. Somerset Maugham story, The Painted Veil and "J'ai Ceuilli la Belle Rose" are difficult folk songs to attempt. Many vocalists do, but few have inhabited these songs like Richard, as if she knew them as a medieval singer in another time and is now singing them in a 21st century context. Here she sounds as if she were imbued with the spirit of "saudade," that magical spirit known only to a few—Brazilian—vocalists. The aching and longing in her voice is palpable in the former song and in the latter, the sense of skittering fun is sublime as Richard skips her way through the folk song. This is why a song like "Jericho" is guaranteed to come as the biggest surprise of the record as it is a Richard composition that appears to sit so perfectly with the classics that it is positively breathtaking.

There is also a sense of wonder in the interpretation of Rogers and Hart's "Where or When," and Joe Williams' "Every Night." These two tracks are sung with an easy sense of their classic nature. The Williams song is bluesy, aided no doubt by superbly plaintive guitar work by Lawrie Koyle and robustly plucked bass by Russell Sholberg, who together with percussionist Richard Brown, are steady throughout. It appears that Richard is headed for a main stage somewhere in the not too distant future to join vocalists like Cassandra Wilson in the great tradition of Jazz vocalization.

About Michelle A. Richard