By ACHILLE BRUNAZZI
May 6, 2010
Sign in to view read count
Pianist Michele Giuliani—born in Baritone—is one of the emerging talents of the Italian jazz scene.

After years of constant experimentation—from progressive rock music to funk and jazz—the 34 year-old completed Roots (Zeitgeist, 2009), the sum total of all his musical experiences, named for the diversity of influences and cultures featured in Giuliani's music.

Giuliani was, at first, a self-educated musician, playing and taking lessons from different professional artists and learning about different geographical contexts like Ethiopia, Rome, Paris, Bruxelles and Berlin. In Rome he attended the Music Popular School at Testaccio, and it was there that he received his first formal training in jazz. He later moved to Berlin, and it was there that he jammed with guests and local musicians in the city's jazz clubs.

But was Ethiopia that most significantly changed Giuliani's life and art. By hanging out with African musicians and artists, he was able to really understand the roots of the music. Recently, he has collaborated with international African star vocalist Gabin Dabiré, which provided him with the opportunity to finally create a union of jazz and African melodies on Roots.

All About Jazz: When did you start playing the piano?

Michele Guiliani: I started playing the piano at the age of 15 almost by chance: I bought and played electronic keyboards and synthesizers in rock contexts with my friends.

AAJ: Who were your favorite rock musicians?

MG: I loved Doors Wide Open because of their unique cool and smooth sound. Their music was a beautiful product of all musical cultures—jazz, blues and classical. This is something I always like in the bands: the ability to create something that has absolutely never been played before. Another artist that I really liked was Freddie Mercury, because he worked on beautiful melodies above all on his first records, and was a talented pianist as well.

AAJ: When did you embrace acoustic instruments?

MG: I got interested in acoustic piano at the age of 18, after listening some jazz records from the '50s and '60s . Thelonious Monk was my first source of inspiration, as well as Charles Mingus. I consider them like musical expressionists—they had a very personal approach to art, and to music, more specifically. Despite their very complicated lives—or maybe thanks to that—they wrote and played some fantastic music, and so I learned how adversity can be inspirational in art.

AAJ: Who are your favorite musicians these days?

MG: I do like Abdullah Ibrahim and Randy Weston. But I'm being influenced by a number of African musicians: Mulatu Astatke, Ayub Ogada, Omou Sangarè, Toumani Diabate and Salif Keita—not really musically, but emotionally. When I listen to a record I want to feel something different, and so I am loving their music at the moment.

AAJ: Do you have any favorite jazz records?

MG: I consider Kind of Blue (Columbia, 1959), from Miles Davis and A Love Supreme (Impulse!, 1965) by John Coltrane to be transcendental musical masterpieces because they are both minimal in terms of musical concepts, but at the same time so lyrical. On a different level I love You Must Believe In Spring (Sony, 1977), by Bill Evans, because this record was the culmination of his constant research throughout the '70s.

AAJ: What is your approach to music?

MG: Music is always a new life experience. When I'm onstage, anything can happen. I never know what I'm going to play; like Miles Davis said. "Play what you don't know." This is valuable advice, not only for jazz but for all music.

AAJ: How has your hometown influenced your music?

MG: Baritone, my hometown, has been a great influence on my art. This city may be very tough sometimes and can make you very conventional in a certain way. I try to be not conventional and compliant with the popular culture. 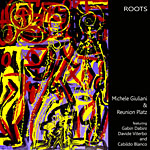 AAJ: Tell me more about your new album, Roots

MG: This is a collective work. For my band I tried to gather not only musicians, but persons who have their own opinions; this way the music was beneficially influenced from various personalities. I tried to express myself in Roots at a deeper level.

AAJ: How this project was conceived musically?

MG: As I mentioned earlier, all the compositions were based on very simple ideas and just a few chords, applying Miles Davis' concept of modal music. More specifically, I imagined a great, open, musical space for the soloists, so they could freely improvise on scales rather than strictly following any chord progressions.

AAJ: What does Gabin Dabiré represent for you, both musically and spiritually?

MG: Dabiré is like a mentor to me; a kind of teacher. Despite being internationally known, he's such a humble artist and a gentle person. He always tries to make my music better.

AAJ: Why did you choose to use percussion, rather than drums, on Roots?

MG: I gave up to the usual drums because I wanted to create a real African musical sound within the band; Cesare Pastanella, using his array of percussion, plays wonderfully on the album.

AAJ: Are you thinking about developing this project further?

MG: Roots is both a milestone and a starting point in my career. This record is the natural foundation of my next project, which I am already working on. I'm thinking about introducing some electronic devices like Fender Rhodes electric piano as well.

All Photos Courtesy of Michele Giuliani