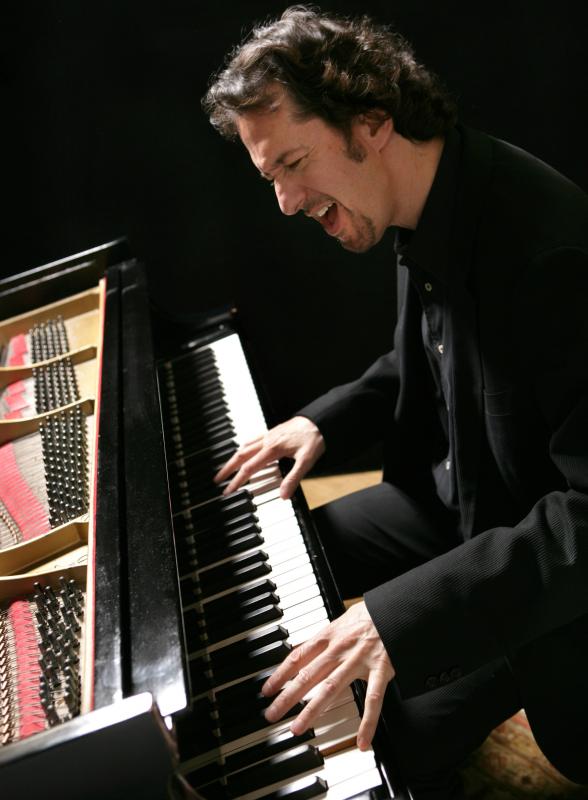 Early in the week prior to this performance, the Douglas Beach House was already nearly sold out and yet, when the doors opened that Sunday afternoon, people still clamored to get in to hear some of vibraphonist Cal Tjader's original band members—one of whom was Michael Wolff, musical director for the show and a unique pianist.

Wolff said, "I met Cal one day when I was walking around Fantasy Records. I'd just been fired. I walked in on them as they listened to a master of a recent recording and I told Tjader that I was available." He was 19 years old. He was hired. Accompanying Wolff was vibraphonist Warren Wolf, bassist Robb Fisher (who played with Tjader), percussionist Pete Escovedo, conguero John Santos and drummer Vince Lateano (who also played with Tjader). When Wolff took to the stage he said, "Of all the places I've ever played, this is the most beautiful, the most magical place to perform."

Between tunes, here and there along the way, Wolff showed his knack for suddenly injecting humor into his introductions, midway through the first set saying, "Now the next tune is by one of my all time favorite composers," he paused, and then burst with, "me." Wolff's humor and serious side, mixed with his hot Latin jazz, made for an upbeat concert that wowed the audience. The tunes selected were all arranged by Wolff, a combination of Tjader's Latin and jazz favorites.

From "Cuban Fantasy" through "Afro Blue" to "Viva Cepeda," written in honor of the great San Francisco Giants first baseman Orlando Cepeda, the sextet soared on a variable high energy trip. It was with "Viva Cepeda," however, that Wolff came down heavy on the piano, at times extending his use of the full keyboard. When he came up to the upper register, the band was flying on Lateano's drums, Escovedo's bongos, and Santo's congas. Wolff stood, leaned down and his fingers ripped into the piece. At the same time, unlike most pianists, Wolff mouthed the rhythm as he played. Suddenly, he stopped and handed it over to Escovedo, Santos and Lateano for an improvisational drum/percussion solo, with Escovedo leading the way, getting down on his timbales and bongos.

When all was said and done, the set finished with Wolf, Fisher and Wolff coming in to wrap it up as the audience gave the group a hearty, sustained applause. During the break, Wolff said, "I try to do things on the piano that may be a bit unusual. I try to pull everything from it otherwise, after awhile, I begin sounding like the drums." It was in the second set, with "Invitation," that this came through almost magically. Instead of the piano sounding as it should, Wolff made it sound almost like bells. That added dimension gave the piece an unusual yet satisfying flavor.

In the middle of the second set, the sextet unfolded trumpeter Dizzy Gillespie's " Night in Tunisia." Lateano drove the piece onward, with Santos riding with him and Escovedo jumping in on bongos. Wolff chimed in and carried the melody onward. People clapped in time with the music, as Wolff stood and clapped along with them, encouraging them to give it their all. People moved, danced, and nodded in time with the music. It was a joyous moment for all.

By the time the set-closer, "Soul Sauce," came down, it was obvious that the audience was having fun and that they had thoroughly enjoyed the concert. Wolff led it off nicely, solidly paving the way for the others to follow. With everyone working together, the piece had a heavy Latin beat, stronger than any of the previous tunes. Toward its conclusion, the piece picked up steam, with vibes and cymbals working overtime. As the piece ended, the house erupted in an ocean of applause.

After the concert, Wolff said, "Out of all of the shows we did over the past three days, this was the best." Wolff certainly did pay tribute to Tjader, right on the mark from the opening "Cuban Fantasy" to the Latin finale, "Soul Sauce."