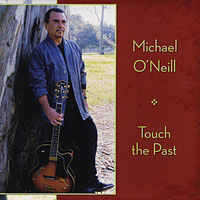 When Michael O'Neill isn't touring with George Benson he does his thing and Touch the Past is his thing. For this Yamaha-sponsored guitarist, the recording is a compliment to the so-called Blue Note era of jazz. His radio-friendly songs, however, don't seem to dwell much in the past, and are very much in the here and now, as this is certainly not a Blue Note production; it's O'Neill through and through.

O'Neill is a wise and mature performer who knows when and how to lead, while always being a paradigmatic team player. He's artistically comfortable with himself. He's also unafraid of melodic beauty, economy of expression, and harmonic simplicity. Perhaps the title cut illustrates these points as well as any other in the CD. Supported by Walt Fowler on flugelhorn, "Touch the Past" features the leader, beginning on a somewhat nostalgic note, as an intro, and moving to a relaxed swing that allows Fowler and O'Neill to massage and caress the pentagram with their respectively welcoming and handsome tones.

In fact, a relaxed, sweet—albeit not cloying, and smooth-yet-textural enough to avoid being just slippery—swing characterizes the entire production. "Blue Chill," with the kissing, kissable, juicy, sensuous, bluesy voice of Lynee Fiddmont, begins deep in the blues, as an intro to the finger snapping scat and O'Neill's delicious solo, followed by an equally delectable piano turn by Chris Ho, while the guitarist's comping is par for the course.

"Just for the Moment" is a well-written ballad, where the pairing of guitar and tenor sax romances the senses, playfully and effectively. O'Neill chose his partners for this date very well, and seems to have written the material taking them into account. Aside from anything else of worth showcased in this release, the guitarist has excellent technique and ideas, a convivial sound and the knowledge to play what the music calls for, in the manner that should be played.

If You Dare; Smooth Sailin; Just for the Moment; Blue Chill; Indiansong; Get on Up; Touch the Past; Constant Seabreeze; Playa Bonita.