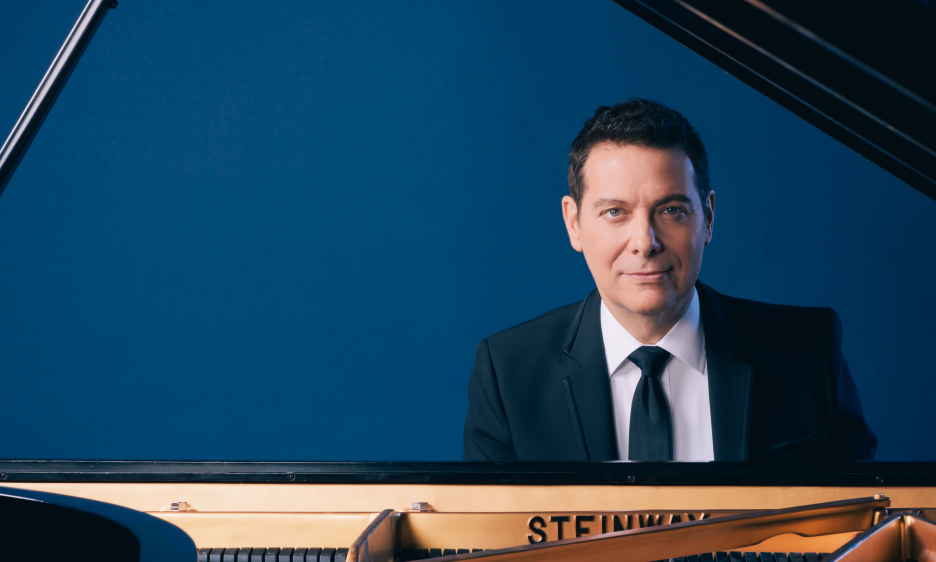 Take 'Body and Soul'... the composer Johnny Green was a very close friend of mine, and I had the opportunity to ask him about his feelings particularly about the Coleman Hawkins recording.

"If you could have dinner with anyone from history, who would you choose?"

That's a game many of us played as we imagined chatting up apostles, prophets, and heroes from the past. With Michael Feinstein, it's not a game. He's done it. He, more than anyone else, is the jazz Boswell: observer and companion to the likes of George Shearing, Rosemary Clooney, Frank Sinatra, Andre Previn, Ira Gershwin, Johnny Green, and many more who wrote or interpreted great jazz.

Understandably, these ghosts haunt the cadence and inflection of his delivery of "The Great Jazz Standards" at Lincoln Center. But they also whisper in the background of the cabaret-pop he takes on the road. After all, as he says, the relationship between jazz and the great American songbook is an intimate one. "Jazz is built on the foundation of American popular song."

I talked to Feinstein while he was vacationing with friends on Long Island. If you're lucky, as I was, he will spin the stories he learned from the Old Testament jazzers. There is no bumptious sense of self-importance, just a smile or a reflective steepling of the fingers as he picks up the thread of a story.

Then there's the story of Ed Heyman's restaurant dinner that arrived late, as his companion said, "from out nowhere." "Oh my God! Give me a menu," says Heyman. And he scrawled on that menu, start to finish, lyrics that would become a huge hit for Bing Crosby four days later. "You came to me from out of nowhere; you took my heart and found it free."

Such rich associations root in the subconscious and inform an artist's playing, singing, and story-telling. As a result, time spent with Michael Feinstein is musically comprehensive. You get to see, hear, and feel the subject at hand.

Meticulous in his appearance, polished in his delivery, Feinstein has a delicate and dexterous touch on the piano. (For example, his take on "The Way You Look Tonight") Likewise, when he's singing, he impresses the audience—not with volume—but with urbanity and intellect. He knows the power of an expectant pause. The result is no breathless rush of notes. It's a conversation. Take, for example, his rendering of "The Same Hello, The Same Goodbye."

"I learned this from Ira Gershwin," he says. "How to sing a lyric, how to interpret the words, as if one is speaking them, as if they are conversation. That's key to me. Musically, I've always taken certain kinds of liberties. But the most important thing to me is to be able to bring forth the essence of what the songwriter intended. Sometimes that gets to be a very different interpretation, but the essence of what the song is about is still communicated."

Think about that endorsement of "different interpretation." Feinstein, along with Wynton Marsalis, the man who sponsors "Michael Feinstein: the Great Jazz Standards" series at Lincoln Center, has been accused of being a backward-looking neo-traditionalist. Hmpf. No one says that to Diane Schuur, Cecile McLorin Salvant, or Diana Krall when they dip into the canon of the past.

"Take "Body and Soul," says Feinstein. The composer Johnny Green was a very close friend of mine, and I had the opportunity to ask him about his feelings particularly about the Coleman Hawkins recording of that song. Johnny liked that recording a lot. To me it's a question of taste."

True, Feinstein has made a name for himself as the ambassador of the Great American Songbook—a hoary bag of chestnuts—but he's no musical Luddite. "I really have nothing against rock and I do sing contemporary songs." Moreover, he admires, promotes, even flacks for contemporary singers like Veronica Swift, who knows her way around a bop chart, and Catherine Russell who sings jazz and blues for today's troubled times.

Feinstein is a force of nature. He's a jazz author, a composer who wrote with Maya Angelou, host of a radio show, principal in a PBS series, nightclub investor, and a harried cat owner whose pets were the subject of a "Housecat House Call" on Animal Planet.

Given his accomplishments and his presto accelerando schedule, I'm reminded of the Nat King Cole lyric: "If you want variety just step in and call for me; I'm an errand boy for rhythm."

He has appeared at Carnegie Hall, Birdland, and the White House. I caught his September performance at the Marathon Center for the Performing Arts, an art deco jewel box in Findlay, Ohio, previously famous as the home of Tell Taylor, the bibulous composer of "Down by the Old Mill Stream." Now, the city may be famous for the time Feinstein brought the crowd to its feet with Gershwin and Fats Waller, growled his way through "St. Louis Blues," and employed a barrel-house left hand on "I Love a Piano."