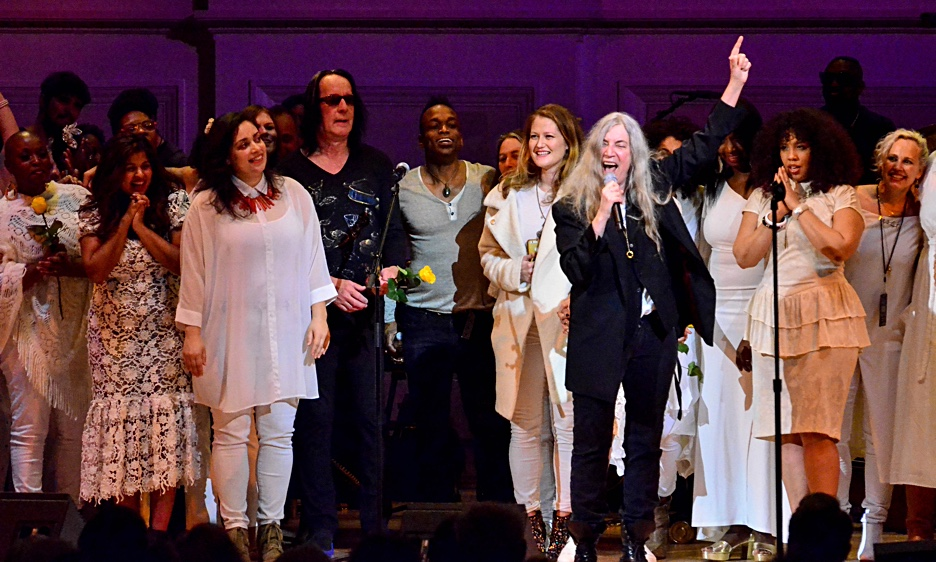 "I know he doesn't like this version, but I'm thanking him anyway," so stated a sly Patti Smith at New York City's Carnegie hall before launching into her classic version of Van Morrison's anthem "Gloria" at the tribute concert to Belfast's favorite son on a cool rain-soaked late March evening.

The founder of City Winery, Michael Dorf, has promoted an annual tribute show/benefit concert for the past 16 years. Each year honors an iconic artist or band. In 2018, the tribute honored Led Zeppelin. Other past honorees include David Bowie, David Byrne and the Talking Heads, Paul Simon, Prince and Bob Dylan.

The 2019 concert honored Sir George Ivan Morrison (known far and wide as Van Morrison) and featured over 20 performances of "classic" tunes made famous by the iconic Irish singer-songwriter, instrumentalist and record producer. Dorf's concert which provides music education to underprivileged youth, benefits a large number of music related institutions, causes and programs including: The Center For Arts Education, The Church Street School of Music and Art, The D'Addario Foundation, Fixing Instruments For Kids In Schools, The Grammy Music Education Coalition, Jazz House Kids, Little Kids Rock, Midori & Friends, The Orchestra Now, Sonic Arts For All! and The VH1 Save The Music Foundation. According to Dorf, the benefit concert series has raised $1.6M over the course of its sixteen years.

Van Morrison's professional career began when he was a teenager in the late 1950s. He plays a vast number of instruments including guitar, harmonica, keyboards and saxophone. In the mid-1960s, Morrison first came to prominence as the lead singer of the R&B band Them, with whom he recorded the original version of "Gloria." In 1967, Morrison began his solo career with the release of the hit single "Brown Eyed Girl." His Astral Weeks album which was released in 1968 on Warner Brothers Records is a classic. Though the album is currently considered a masterpiece, it did not sell well upon release. Morrison's musical canon is a magnificent mélange of soul, R&B, rock, pop, Celtic rhythms, folk, gospel, country, blues, jazz and fusion. His most popular songs are often seen as a foundation of "a music of your life" playlist. In addition to "Brown Eyed Girl," Morrison has brought the world "Jackie Wilson Said (I'm in Heaven When You Smile)," "Moondance," "Into The Mystic," "Caravan," "Madame George," "Wavelength," "Crazy Love," "Domino," "Have I Told You Lately," "Wild Night" and many others. He has received two Grammy Awards, the 1994 Brit Award for Outstanding Contribution to Music and the 2017 Americana Music Lifetime Achievement Award for Songwriting, He was inducted into the Rock 'n' Roll Hall of Fame in 1994 and the Songwriters Hall of Fame in 2003. In 2016, he was knighted for services to the music industry and to tourism in Northern Ireland.

Over the years, Morrison has released forty studio albums, six live albums, six compilation albums and over seventy singles. His latest album, The Profit Speaks (Exile Productions Ltd.) was released in 2018. He is known to his fans by the nickname "Van the Man."

The evening began when Michael Dorf appeared on the prestigious and historic venue's Isaac Stern Auditorium stage and eloquently spoke about the concert series, the foundations that benefit from the proceeds and the evening's honoree. After his short speech, the evening was all about the performances.

Gaslight Anthem singer Brian Fallon took over and delivered an acoustic, somber take on "High Summer." The Blind Boys of Alabama were up next and gave the evening its first taste of gospel when they took the sold-out crowd to church with a stirring five-part harmony version of "By His Grace."

The evening's performances could be described as a continuous highlight reel. The highest of the highlights included: Alvarez's thrilling duet with Amy Helm on "If I Ever Needed Someone," Robert Earl Keen's countrified version of "Wild Night" that featured his fiddle player delivering the song's signature horn parts, the Secret Sisters take on "Precious Time," Low Cut Connie's lead singer and piano virtuoso Adam Weiner channeling his inner Jerry Lee Lewis with his outrageous showmanship on "Here Comes The Night," Josh Ritter delivering a very folksy version of "Linden Arden Stole the Highlights" from Veedon Fleece (Warner Brothers Records, 1974), Valerie June's rendition of "Sweet Thing," Lee Fields doing justice to "And It Stoned Me" (with a superb version of the tune) and Anderson East providing a country-soul take on "Purple Heather." David Johansen's powerful version of the Them-nugget "My Lonely Sad Eyes" was a wonderful reminder that there are some amazing and criminally ignored songs from the mid-'60s. Bettye LaVette delivered a magnetic, mesmerizing, hypnotic and spellbinding "Have I Told You Lately" that left the audience speechless. In another WOW moment, the audience was brought to its feet by the Resistance Revival Chorus. Morrison's "Days Like This," became the official anthem of the peace movement in Northern Ireland during the 1990s. The 30-woman strong chorus, with each member clad in white sang a soul-infused, gospelized version of this powerful song.

In addition to these fabulous performances, the evening featured a number of fantastic versions of some of Morrison's greatest tunes. Marc Cohn and Shawn Colvin turned "Into the Mystic" into a brilliant duet. Richard Marx paid homage to both Morrison and the late New Orleans piano man on "Domino." Todd Rundgren was the evening's pied piper when he stalked around the stage leading the crowd through a sing-along version of "Brown Eyed Girl."

The show ended with two powerhouse performances. The first, from Glen Hansard, took the audience's breath away with a solo and acoustic version of "Astral Weeks" that culminated with him at the edge of the stage singing at the top of his lungs without benefit of amplification or microphone. The second was Smith's version of "Gloria" that served as the finale on which she and her band, as well as the house band, was joined by each of the evening's artists.

After the concert, for a select few, the evening continued at City Winery where revelers were treated to a champagne toast, a buffet, and a celebratory concert led by Low Cut Connie and special performances by LaVette and other musicians.