As a native New Orleanian expatriated over 20 years ago by my Pennsylvania-born wife, I am constantly looking for ways to connect to the mother land. What most of us who have moved away miss the most, besides the people, is the food and music. As residents, we always looked forward to the New Orleans Jazz and Heritage Festival so we could experience both the cuisine and indigenous sounds in the same setting. So what's a person to do living in the Northeast United States with limited access to what was and is so desired?

On a beautiful May weekend, I set forth on a journey to Augusta, New Jersey to experience Michael Arnone's 20th anniversary Crawfish Festival. Having learned to lower my expectations to all things New Orleans occurring outside of the Crescent City, I was not expecting what I experienced over the weekend. This was no doubt a mini-jazz festival in the middle of North Jersey, complete with the great food and music one might expect in New Orleans. Held on the spacious Sussex County Fairgrounds, the Crawfish Festival has three stages and twenty-four acts over its two day stint. For those who choose the camping option, evening concerts this year included Bonerama, Big Sam's Funky Nation, and Trombone Shorty.

The festival itself was well run with highly visible staff and security to serve food quickly and help the many thousands of festival-goers with any concern. As guitarist and veteran festival performer Paul Sanchez commented, "This is one of the best of the Louisiana-themed festivals outside of New Orleans. They treat the performers well, and the food taste like it came from New Orleans." The food comment is no small compliment, and he was absolutely correct. The crawfish were plentiful and perfectly spiced by veteran crawfish cook "Wild Bill." The Jambalaya was cooked in large cast-ironed vats with the rice perfectly infused with spice and included a large amount of Louisiana sausage and chicken. The fried chicken was so moist on the inside and light and crispy on the outside that a visitor would think it was being served at one of the famous fried chicken Meccas of New Orleans—Little Dizzy's or Ida Mae's Scotch House. Pairing these with all of the other Louisiana foods—red beans and rice, gumbo, crawfish pie, crawfish bread, bread pudding, and beignets—and you have the setting for a great Louisiana music festival in the middle of New Jersey.

Each of the three stages had its own personality. The larger main stage hosted high energy acts that could play to the thousands who pulled up their lawn chairs to hear the powerful groups. A few of the ten bands on this stage included the High and Mighty Brass Band, with its Dirty Dozen/ Rebirth Brass Band stylings, and Papa Grow's Funk, which impressed the audience with its hard driving organ-fueled New Orleans sound. Day two featured Grammy-nominated blues guitarist Tab Benoit who drew thousands to stand and dance in the pit in front of the stage. The energy was palpable as Benoit moved across the stage playing flawless, high energy blues guitar.

A Main Stage treat for those who have lived in New Orleans was an appearance by The Radiators—a twenty-six year old mainstay group in the city that many of the 40 and 50 year-olds in the crowd remember seeing in the local college clubs. Though noticeably older—and aren't we all?—they had not lost their inviting party-time sound or energy for the music. A special moment occurred when The Radiators invited Tab Benoit to the stage to play one song with them to add some of his blues licks.

The smaller, more intimate Pavilion Stage allowed festival-goers to stand up close to the performers. The great chemistry between guitarist Paul Sanchez and singer John Boutte was a pleasure to witness. Sanchez's fast-talking New Orleans accent and engaging personality proved a perfect complement to Boutte's Sam Cooke-like voice. The duo could quickly switch from upbeat tunes like Johnny Mercer's "Accentuate the Positive" and "Foot of Canal Street" to the more poignant Randy Newman tune "Louisiana 1927," which had many in the audience near tears from Boutte's beautiful voice and the memory of the recent flooding in the city.

The crowd was then treated to the blues guitar of Guitar Shorty. Backed by an outstanding band, Guitar Shorty's many years of experience showed as he made his playing look easy. With his large grin, he played many blues favorites and ended, to the delight of the crowd, with a Jimi Hendrix-like rendition of the "Star Spangled Banner" and "Glory Glory Hallelujah." Eric Lindell then took over the stage with his Louisiana rock style. Driven by heavy drums and a saxophone duo, Lindell's voice was clearly made for this music—clear, articulate, and pleasant to listen to in a rock format.

Another favorable surprise occurred as Terrence Simien and the Zydeco Experience closed out the Pavillion Stage on the first night. Aside from being a top-notch accordion player, Simien has a most engaging stage presence. His ever-present captivating smile grabbed the audience in the pure zydeco and "zydeco-inflected" songs that included Beatle tunes. As Simien threw Mardi Gras beads into the audience, the crowd was treated to festive, party-time music that proved to be a memorable ending to the first evening.

In a tribute to the New Orleans Jazz Festival's always popular Gospel Tent, the second morning opened with Matt Angus Thing with Anthony Morgan's Inspirational Choir of Harlem. The pairing turned out to be a very workable combination of musicians with the choir giving depth to the Angus cover of "Love The One You're With" while the Angus band soulfully backed the choir in familiar church tunes like "Oh Happy Day." The eight member choir was especially powerful, with each singer an emotional soloist in their own right: singing together they had the crowd swaying, praising, and feeling good about the start of the day. The Pavillion stage closed with the always popular Marcia Ball. With her jazzy piano, Southwest Louisiana style and strong raspy voice, Ball sang original songs about everyday life, including "Married Life."

Zydeco and Cajun fans were certainly not disappointed at the festival. The stage in the dance hall hosted some of the best Cajun and Zydeco bands from the state, including The Pine Leaf Boys, Steve Riley and the Mamou Playboys, and Jeffery Broussard and the Creole Cowboys. The large raised dance floor allowed the crowd to dance comfortably to this upbeat folk music that featured outstanding accordion performances by both Broussard and Riley. Many of the Zydeco/Cajun fans rarely left the hall as they were able to dance for hours and seemed content being given the opportunity to experience the best of this musical style for two straight days.

Michael Arnone began this festival 20 years ago when a group of seventy friends who missed New Orleans got together to boil 300 pounds of crawfish and listen to a couple of Louisiana bands. Arnone is an affable man who is clearly pleased with what he has created. He could be seen on occasion riding around the festival grounds on his personalized golf cart greeting staff and visitors. Looking around the fair grounds, it was hard not to notice the number of New Orleans, Jazz Fest, LSU, and Tulane t-shirts and hats. Arnone seems to have created a place where those who miss the food, music, and people they have left behind in New Orleans can gather and enjoy a few days of the familiar sights, sounds, and smells. And for this expat, it worked. At this point, I'm good for a few weeks—until I miss New Orleans again. But it's certainly comforting to know that every May I can find a touch of home in the hills of New Jersey. 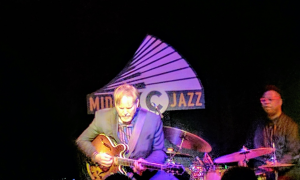