By DOUG COLLETTE
November 9, 2013
Sign in to view read count 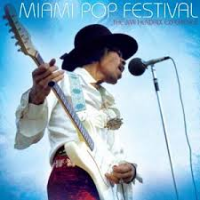 Containing the whole of the trio's evening set (and two selections from the afternoon performance) at a festival co-produced by Michael Lang, (who would go on to oversee 1969's Woodstock event), the cd is also notable for an early appearance of what would become a staple of the iconic guitarist's live sets for the remainder of his career: "Hear My Train A Comin'" emanates anticipation and foreboding in such a way that Hendrix' emotional investment is unmistakable in both the song and the performance.

The debut performance of "Tax Free" takes place on Miami Pop Festival as well, and while it's a slight tune to be sure, it remains significant not just as one of the rare covers the band adopted, but because this near-nine minute instrumental rendition offered a launching point for extended improvisation. The initial song of the set, "Hey Joe," is another of those non- originals-actually the first JHE single released in England in 1966- but the trio gives the tune an exploratory reading, phasing into it via a dissonant instrumental intro.

Apart from the aforementioned 'new' numbers, the eight- song setlist contained no surprises, at least on the surface, but Hendrix and Mitchell's unusually complementary bond with bassist Noel Redding was perhaps never tighter than at this point in the existence of the Experience. Though the drummer and guitarist play with comparable complexity during a slashing take on "Fire," all three sound equally prominent in the Eddie Kramer mix of "Red House," rendering this slow blues the high point of the disc: the Experience doesn't just play the changes, but engages in a savage romp mid-take that, in a different context, might well define British blues of the period.

The inclusion of two excerpts from the afternoon show at the rain- shortened festival is not random filler merely meant to stretch the cd to approximately an hour's playing time. Rather, these staples of the Jimi Hendrix Experience repertoire become purposeful in the context of Miami Pop Festival, the two fairly abbreviated numbers reaffirming the synchrony within the preceding playing.