By WOODROW WILKINS
July 6, 2006
Sign in to view read count 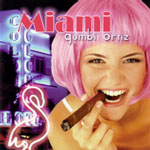 Gumbi Ortiz's debut is a musical smorgasbord that represents the diverse cultural influences that have shaped the percussionist's life. A longtime member of guitarist Al Di Meola's band, Ortiz has a passion for jamming—and food. It's the former that helped launch his professional career. Blending his Afro-Cuban heritage with jazz and other styles of music, he's followed the lead of Carlos Santana in mixing Latin sounds with pop.

Although he started playing the sax when he was a child, to honor his sax-playing father, Ortiz preferred percussion instruments. In 1986, Di Meola found Ortiz jamming at a club in St. Petersburg, Florida. Ortiz settled there, began working with Cuban acts in and around Miami, and became a regular member of Di Meola's band.

Although Ortiz has led a band (The Gumbi Band), he had never released a solo album—until now. The talented and diverse cast he assembled to make Miami includes Di Meola, Jeff Lorber (keys), Eric Marienthal (sax), Dave Weckl (drums), and Spyro Gyra members Jay Beckenstein (sax) and Scott Ambush (bass). Ortiz compares the project to a culinary enterprise. "It's kinda like opening up a restaurant, he says. "You think of the menu and what you wanna serve people. I come from this culture: 'I want some of this, and some of this, some of this,' and now we're ready to open the store.

The appetizer is "South Beach. Paced by Brandon Fields' flute, this groove sets the stage for what's to come—the different colors and flavors of South Florida. A bit of groovalicious funk is served up on the title song. Fields takes point on sax, with a thumping bass line by Mario Rodriguez, supplemented by Barry Miles and Mark Halinsky on keys and synths. Kristen Pinello and Julie O'Brien Poteat add some ethereal background vocals.

Ambush is the focus on "Biscayne, which also features former Spyro Gyra band mate Joel Rosenblatt on drums. The all-too-brief, Brazilian-inspired "Samba do Suerte gives us a heaping helping of Ortiz. Likewise, "Rush Hour Jam is a one-minute foray with Ortiz and Weckl at the wheels. Ortiz doubles on keys when he and Weckl offer another duet, "Amnesia. Beckenstein, keyboardist Rachel Z and Marienthal also contribute on such entrees as "In the Grove, "T-Back and the lone cover tune, Janet Jackson's "Together Again.

About food, Ortiz says that whether you overcook it or undercook it, it's nasty. The same applies to assembling the right combination of musicians for each song. With Miami to his credit, Ortiz is the melodic equivalent of a master chef. Whether you're a picky eater or an insatiable gourmand, the buffet that is Miami is sure to whet your appetite.