By Nenad Georgievski
May 11, 2007
Sign in to view read count 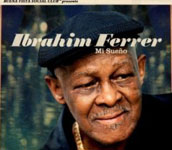 Very few people can boast the strange, unexpected and fortuitous resurrection of their careers that singer Ibrahim Ferrer has had. Literally pulled out of retirement, Ferrer gave the new millennia a taste of old Cuban music. The success of Buena Vista Social Club (Nonesuch, 1997), and the global popularity that the musicians involved gained, gave the world a group of musicians that can be identified with Cuban music. The story itself is now the stuff of legend, and one of its major outcomes was that Ferrer—one of the surprises to emerge from the sessions—was able to forge a highly successful solo career along with others from the recording.

Ferrer's unique talent was noticed by guitarist/vocalist Ry Cooder, who despite clashes, opposition and sanctions by US authorities, went on to produce Ferrer's Buena Vista Social Club Presents Ibrahim Ferrer (Nonesuch, 1999) and Buenos Hermanos (Nonesuch, 2003). Both albums had that 1940s club ambience that characterized the highly acclaimed Buena Vista Social Club, and featured a plethora of exceptional artists whose passion and mutual admiration produced brilliant results.

All of this gave Ferrer an opportunity to make his dream project, to finally record an album of bolero music, a style closer to his heart. Unfortunately, in the midst of the recording sessions, Ferrer passed away, which threatened to halt this project so near its completion. Fortunately, he left enough high quality vocal performances for the musicians to finish the album.

Mi Sueño presents a startling contrast to Ferrer's previous two releases. Gone are the lavish arrangements, replaced instead by the Buenos Hermanos, guided by pianist Roberto Fonseca. Fonseca, along with bassist Orlando Cachaito Lopez (who has played on many BVSC sessions) and guitarist Manuel Galban, deliver an album with a nocturnal feeling stripped to its basics. Everything is kept minimal, even contributions from the guests.

The songs evoke an intimate blues, most delivered at the pace of a late-night stroll. Yet, despite the dark shading and heart-rending tempos, Ferrer's voice is transcendent and emotional. Spontaneity is a hallmark of this album and all of the twelve boleros have their own sublime beauty and spiritual depth. This music is never contrived or forced. It exists for itself and its listener, and not for some fashion or fad.

Mi Sueño is a beautifully textured and varied album, where each song is a gem that emanates lyrical depth and sincere melodies rooted in emotion. It is not only Ferrer's masterpiece, but one of Cuban music's most important and passionate records, delivered by one of its finest voices.