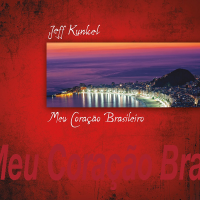 Brazil never lets go once it's wrapped its arms around a musician. Pianist Jeff Kunkel discovered this firsthand. In 2007, Kunkel, the Coordinator of Jazz Studies at Montclair State University's Cali School of Music in New Jersey, took a sabbatical and took off to see Brazil for himself. The experience was life-changing, and he's since returned there several times to musically mingle with his newfound friends.

Meu Coracao Brasileiro is the result of Kunkel's experiences with the people, places and sounds that won him over during his stay(s) in Brazil. On this album, recorded with his Brazilian buddies during stints in Rio De Janeiro in 2011 and 2012, Kunkel presents eleven originals that serve as a reminder of why Brazilian music first seduced American audiences more than a half-century ago. The musical skills of players like Charlie Byrd and Stan Getz, great though they were, had little-to-nothing to do with their success in winning scores of converts to the Brazilian music camp; it had more to do with the quiet art of seduction and a paradise found in sound-and-lyric images. For it only takes a few bars of a bossa nova to conjure thoughts of sun-dappled bodies stretched out in a state of repose on the beach, light breezes wafting along, and waves gently lapping against the shore.

The music presented here, like many a Brazilian beauty, has a way of gently caressing the ears in low-key fashion. A few pieces within this collection are somewhat peppy (i.e. "Rodizio De Pizza" and "Bebop Brasiliero"), but Meu Coracao Brasiliero is mostly a mild-and-understated affair. Kunkel and his crew don't try anything fancy. Instead, they just sit back, relax, and play some music in the spirit of friendship and togetherness.

Nobody makes an attempt to outshine anybody else here, but a few key players help to shape the sound of this album. Flautist Mauro Senise brings warmth to the music, vocalist Vika Barcellos gives off a sense of fragile grace, and Kunkel, along with bassist Alex Rocha and drummer Haroldo Mauro, Jr., comfortably glides along with nary a worry to be had.

Kunkel's love for the music and people of Brazil is palpable, and he shares that love and passion throughout Meu Coracao Brasiliero.