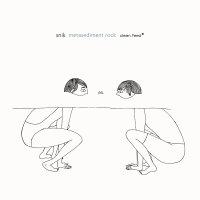 Snik is a Norwegian quartet with a spirited approach as the respective musicians have been quite active performing with conventional and avant-garde European and USA-based jazz artists. Trombonist Kristoffer Kompen and double bassist Ole Morten Vagan's compositions present a kaleidoscopic mix of popping post-bop and free-bop style motifs often catapulted by a web of knotty unison choruses and journeys into the free realm.

No doubt, these gents convey an assertive posture amid linear and surging musical plots, also featuring downward spirals, dappled with temperance and the frontline's fierce soloing exploits. The band often abides by a rapid all hands on deck convergence with episodic improv segments along with some edgy and flaming dialogues, abetted by shrewdly executed arrangements. But the artists tone it down with a simple, yet rather nondescript primary motif on "Knis," which is a piece that sounds more like a rehearsal.

The final track "Lonely Again" is an upbeat affair, accelerated by the rhythm section's zesty grooves in support of Kompen's pumping lines and Kristoffer Berre Albert's cyclical counterpoint measures. In addition, several works offer a homogenous blend of catchy melodies sandwiched in between some rough and tumble interplay and a host of thorny breakouts.

A few of the creaky and raw free-jazz improvisational etudes that either launch a given piece or reside in the bridge sections do not always add much value, and occasionally serve as a distraction to Kompen and Vagan's acute and witty composition-based proficiencies. However, this is an electrifying quartet that bestows a wealth of thought-provoking stratagems.