By GLENN ASTARITA
December 30, 2013
Sign in to view read count
Track review of "The Longing – In Loving Memory Of Shaykh Hassan Cisse (ra)" 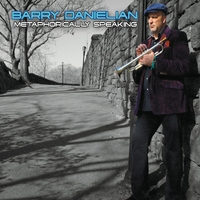 Trumpeter Barry Danielian seemingly makes a good living as an in-demand session artist via stints with Bruce Springsteen, Barbara Streisand, Billy Joel and many others of note, spanning just about all conceivable music genres. On this solo effort, he garners the support of many New York-based jazz artists. While Danielian doesn't break new ground, the album may spark interest with jazz fusion and jazz-funk enthusiasts.

At times, Danielian rekindles notions of '70s Brecker Brothers fare with his use of the clavinet. On several tracks, he draws a few parallels to Herbie Hancock's groundbreaking Headhunters unit. Essentially, the artist overlays several instruments on a per-track basis as the preponderance of these works are upbeat, in-the-pocket style groove fests, countered with a smidgeon of off-center backbeats and breezy horns arrangements.

One of the standout works is "The Longing—In Loving Memory Of Shaykh Hassan Cisse (ra)," partially steered by David Mann's sleek flute lines, executed in unison with Danielian's intricately orchestrated synth strings movements. With a softly woven underlying theme, bass clarinetist Charles Pillow renders a contrasting ostinato motif riding above the mid-tempo pulse. During the bridge, Danielian performing on trumpet, reformulates the primary theme with his melodically treated flurries. This piece casts a little big band type arrangement and radiantly contrasts many of the buoyant fusion and funk tinted works. Nonetheless, Metaphorically Speaking is a jaunty excursion, abetted by the crystalline audio processing.