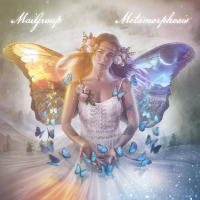 Metamorphosis, a word of Greek derivation, describes the dramatic change of physical form that occurs when, for example, a caterpillar becomes a butterfly. Estonian jazz bassist Mai Leisz (pronounced Lease) uses it to describe her own psychological transformation "as a person and as a musician, from a girl to a woman, from a music student to a world-touring musician, from the tiny Estonian village of Leisi to Los Angeles, from unhappy to happy." She says: "I no longer search for happiness from the outside world, as happiness starts from within."

She just wants to make sure everyone knows it: "The transformation has been painful but the aftermath is beauty."

Leisz is best known for her work with her band, MaiGroup, backing David Crosby, of Crosby, Stills and Nash (and before that, of course, The Byrds). She describes him as "a life-changing force."

Among other musicians who have influenced her, she names Jackson Browne, "one of the most beautiful souls I know." It's all very heartfelt but more than a trifle gushing. Ordinary people don't exist for Leisz. They are all beautiful and "sources of light."

Still, it is the music that counts and Leisz expresses herself eloquently on both regular and fretless bass, keeping up with high-flying company that includes guitarist Bill Frisell on the lilting, meditative ballad "Gregory"—which she wrote for her husband—and saxophonist Charles Lloyd, elder statesman of the session, on "Three Nights." Lloyd's concise musings on tenor add a welcome acerbic note to the proceedings, with fine backing from MaiGroup's Simon Berggren on piano and Leisz herself on bass.

David Crosby contributes a vocal on "Here It's Almost Sunset," with lyrics that evoke days gone by when Woodstock represented a call to an admittedly blurred and ill-defined revolution, and wasn't just an opportunity to make money.

The album was produced by Greg, "pulse of my heart, my love, my anchor, my home." A gush rush! "Working on this album with you has been such a beautiful experience. Thank you for seeing me so clearly and for building my restless heart a safe place in your very own." If she wasn't such an accomplished musician, you'd be tempted to... But no, let's not go there: MaiGroup's album is interesting and sincere—enough said!