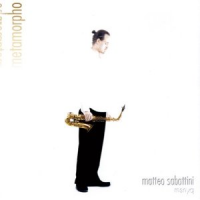 Jazz can broadly be divided into that which mines the past for inspiration and that which doesn't. Alto saxophonist Matteo Sabattini demonstrated on Dawning (Fresh Sound New Talent, 2011)—his debut as leader for the Catalan label—that he's an unabashed modernist. Sabattini and his New York Quintet take an unhurried approach to these ten compositions where melodic development defines the contours of the music. To be sure, there's fire in the playing on occasion, but as some of the titles perhaps suggest, a strong impressionism holds sway and much of the music has a reflective quality that strikes a balance between cerebral and emotional terrain.

One personnel change from Dawning sees pianist Aaron Parks replacing Kristjan Randalu, and hooking up with long-time collaborator, guitarist Mike Moreno. Their shared language—one that uses space judiciously—lends subtle cohesion to the quintet. Parks rhythmic comping, gently hewn elaborations and flowing solos are fairly pervasive throughout, whereas Moreno operates a little more in the shadows; his single notes shimmer ethereally or sparkle briefly, like stars blinking in a night sky, and even in his most fluid solos not a note seems superfluous. Moreno's range of vocabulary is illustrated on the dynamic "Metamorpho," which features a thrilling exchange between Sabattini and guest, tenor saxophonist Chris Potter.

Parks, bassist Matt Clohesy and effervescent drummer Obed Calvaire's rhythmic intro on "Like a Butterfly" could have been penned by Radiohead's Thom Yorke, though Sabattini and Moreno's cheery unison melody somewhat dispels the notion. Sabattini blows freely with seductive momentum, followed by Parks who plots his own course, teasing short phrases and a series of brief tumbling lines from his keys as Moreno picks up the mantra-like motif. The energy levels are high, but this number and the title track apart, the music on Metamorpho is mostly mid-tempo or colorfully serene.

The skeletal frame of "Tears Inside," built around the simplest of melodies, allows Sabattini and Moreno to step into the limelight, though the rhythm section's independent lines are quietly compelling. Sabattini's slowly intoxicating lyricism at the outset of "Invisible Shield" is evocative of saxophonist Wayne Shorter's "Infant Eyes." Moreno stretches out over a walking bass as Calvaire stirs the pot. Sabattini's return restores the reverie of the song's intro.

Two duets, "Painted Hills" and "Fooling the Mirror," pit Sabattini first with Parks, and then Moreno, on acoustic guitar. In such intimate settings Sabattini's singular voice and inherent lyricism shine through. Even the one nod to the jazz cannon, a caressing version of "Body and Soul," is dressed in new robes—the famous melody merely hinted at by Sabattini and Moreno. "Yuna" features melodic statements from Parks, Sabattini and Moreno, interspaced among tightly knit unison lines. The more up-tempo "Dreaming Loud" follows a similar pattern. Clohesy, felt rather than heard throughout, steps up on the closer "qq" with a lyrical solo.

One of the most elegantly persuasive of current alto saxophonists, Metamorpho continues Sabattini's distinct and impressive path as a composer and leader of note. Clearly, backed by his fine New York Quintet, he has the wind in his sails.