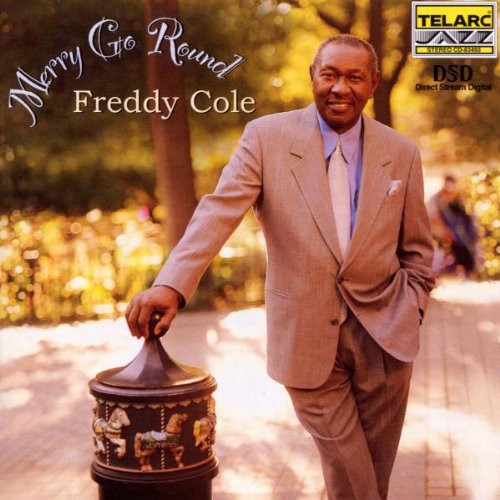 Have sympathy for the sibling of the famous entertainer. Folks like Jerry Van Dyke, Billy Ripken, and the Baldwin brother that made the movie with Cindy Crawford (at least he got to work with a supermodel) all have had careers in which they could not step out from the large shadow cast by their brothers. The best bet for brothers is to pick separate careers or instruments like Elvin, Thad and Hank Jones. But save you pity for singer/pianist Freddie Cole. Brother Nat King Cole passed away almost thirty-five years ago and Freddie has carved his own career, even though comparisons are inevitable.

For his debut on Telarc, Cole selected his longtime producer Todd Barkin. Barkin mastered several discs for Cole including To The Ends Of The Earth (Fantasy 1998) a date similar to this. Their successful formula is to pick popular tunes not often heard today, build them around a piano quartet, and toss in cameos by New York’s finest jazz musicians. While the likes of Eric Alexander, Lew Soloff, Steve Davis, Lou Marini, and Gary Smulyan are not given large soloing space, their presence sprinkles the finishing touches on a pleasant session.

Cole, now in his seventies, has a voice similar to Nat’s, but with a mature, husky sound. Sort of like Tony Bennett’s nineties sound, rough around the edges, creating an authentic tone. Cole can best described as a mixed between Brother Nat and Jon Hendricks. Cole chooses several songs associated with Nat like Johnny Mercer’s “I Remember You.” Along with Barkan, Cole selects a varied songbook that includes Jerome Kern “Smoke Gets In Your Eyes”, Peggy Lee “Take A Little Time To Smile”, and Cole Porter ‘You’re Sensational.” The title track by Herb Martin and Bobby Scott, recorded for the first time, is a bittersweet melody like Billy Strayhorn’s “Lush Life.” Cole delivers an emotional performance wrapped in Lou Marini’s warm alto flute. Maybe Freddie isn’t Nat, but Natalie’s uncle is fine in his own world

Track List:Watching You, Watching Me; It’s Impossible; Merry-Go-Round; I Remember You; Forgive My Heart; Through A Long And Sleepless Night; If You Went Away; Take A Little Time To Smile; I Realize Now / I Miss You So; Smoke Gets In Your Eyes; You’re Sensational.

Watching You, Watching Me; It's Impossible; Merry-Go-Round; I Remember You; Forgive My Heart; Through A Long And Sleepless Night; If You Went Away; Take A Little Time To Smile; I Realize Now/I Miss You So; Smoke Gets In Your Eyes; You're Sensational