Merle Haggard at the Paramount Theater 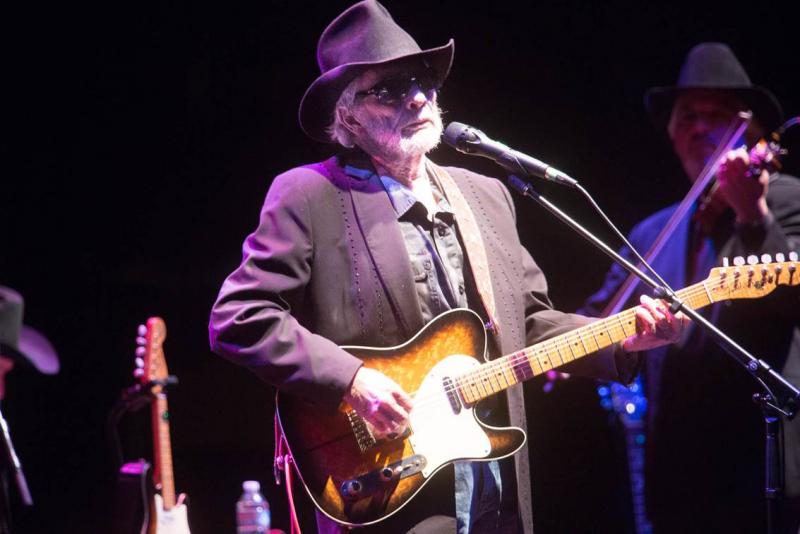 Some consider Merle Haggard to be "The Poet Laureate of California." Certainly, he is the state's most famous singer-songwriter and bandleader. His straight-shooting songs, with their wonderful lyrics, have the drama and controversy befitting a country music "rebel."

Merle has been nothing if not resilient. He is recovering from a bout with double pneumonia, which had forced a postponement of the initial December date for this concert in Oakland's lovely and historic Paramount Theater. it had been originally scheduled for. For this Saturday-night event, sponsored by SFJAZZ, a rapturous and enthusiastic crowd of mostly older folks awaited him.

The concert began when Noel Haggard, his 51-year-old son (and his fourth child with the first of his five wives), fronted The Strangers, for a few rollicking numbers. Following a brief musical interlude—which featured the soaring pedal steel of band veteran Norm Hamlet—rapturous applause and a standing ovation greeted Merle, as he emerged on stage. Clad in dark clothing and wearing sunglasses and a Stetson hat, and with a white beard and a thick silver mane rising from under his black Stetson, he picked up his signature Martin guitar and launched into "Big City":

"Turn me loose, set me free
Somewhere in the middle of Montana
And gimme all I've got comin' to me
And keep your retirement
And your so called social security"

"Silver Wings," a desolate ballad about desertion by a lover boarding a jet liner, followed and featured lyrical sax from soulful saxophonist Renato Caranto. Caranto, a Philippine native, has performed with the likes of Esperanza Spalding, Bernard Purdie, Arturo Sandoval, James Carter, Clarence Clemons, the Temptations and the The Four Tops.

Mournful fiddling from Scott Joss then marked the start of the sentimental ballad "The Farmer's Daughter."

Merle's parents had migrated to Bakersfield, California from Checotah, Oklahoma in 1934. Flossie Mae and James Francis Haggard then moved into a boxcar in Oildale, near Bakersfield, and turned it into a home. Tragically, James Francis died of a cerebral hemorrhage in 1945, leaving the eight-year-old Merle fatherless. After older brother Lowell presented a 12-year-old Merle with a guitar, he taught himself to play by listening to the music of his three favorite musicians: Hank Williams, Bob Wills and Lefty Frizzell (whose voice he strove to imitate).

A busy, working as a bookkeeper and struggling to feed her family, resulted in Merle rebelling; he served time in juvenile detention and later in prison. As he wrote in "Mama Tried" (a tune the audience clapped along in time to that evening):

"Dear old Daddy, rest his soul
Left my mom a heavy load
She tried so very hard to fill his shoes
Working hours without rest
Wanted me to have the best
She tried to raise me right but I refused"

Although Merle had a rough stretch following his release from prison in 1960, he soon became one of the stars of the Bakersfield Sound (a grittier form of Country), and he released his first single, "Skid Row," in 1962. Merle's career took off after the release of "Branded Man" in 1966, and he has never looked back.

His current band includes some members who have been with him since 1965, as well as his 17-year-old son Ben Haggard on lead guitar. Keyboard player Floyd Domino first came to notice playing swing with Asleep at the Wheel. Dubbed "the heir to the Bakersfield throne," Scott Joss played expert guitar and mandolin and filled in with backing vocals. Ventura, California native Jim Christie held down the drums in the back, while Doug Colosio, Merle's former sound man, was on bass.

Merle also sang "Pancho and Lefty," Townes Van Zant's most famous tune which garnered Haggard his only gold single for his a 1983 duet with country music legend Willie Nelson.

The Texan Van Zandt was a manic depressive alcoholic and heroin addict who died at 33, leaving three ex wives, a few offspring and a substantial body of work. Steve Earle, the multi-genre guitarist and singer-songwriter and a friend and admirer, named his singer-songwriter son, Justin Townes Earle, after Van Zandt.

A rendition of "Sing Me Back Home" may have been the evening's saddest song. This number-one hit for Merle in 1968 was based on Jimmy "Rabbit" Hendricks, a death-row inmate Merle had befriended in San Quentin and whose walk to execution Merle had personally witnessed.

"Sing Me Back Home" has received widespread acclaim—even to the point of crossing musical genres. A live recording by country rockers The Byrds is on the four-disk compilation There Is a Season (Legacy Recordings, 2006).

Later on, it was time for Merle's first number one hit in 1967, "I am a Lonesome Fugitive." Not actually penned by him, it had resonated with the singer because of his past:

"I'd like to settle down but they won't let me
A fugitive must be a rolling stone
Down every road there's always one more city
I'm on the run, the highway is my home"

The tune was followed by a country swing breakdown, allowing Ben Haggard to stretch out on guitar, riffing in tandem with Hamlet's divine pedal steel.

The audience clapped along with "The Fighting Side of Me," Merle's homage to redneck militarism. The 1970 ballad helped to make him a legend. Astonishingly, history was almost different because Merle had lobbied for "Irma Jackson," his ballad about Black-white love (which was not performed), be released as a single instead:

"The Bottle Let Me Down," the depressed alcoholic's theme song, was next Judging by the sustained cheers and wild applause it generated, the crowd particularly seemed to identify with the tune.

In 1970, Merle had released A Tribute to the Best Damn Fiddle Player in the World (Capitol, 1970), an album dedicated to Bob Wills, the most famous country and western swing artist of all time. Bob Wills, an unreformed alcoholic whose jazzy tunes helped bring life to Oklahoma's difficult depression years, was quite a character. He performed in black face with a minstrel show in 1929 and is said to have ridden 50 miles on horseback to see Bessie Smith perform. Standing firm in the face of obdurate tradition, Wills had introduced the drum set to country music by refusing to perform without one. Country has never been the same since! "Take Me Back to Tulsa," Merle's choice from the Wills wonder box for the evening, remains a Western swing standard classic. To create it, Bob Wills and Tommy Duncan had added lyrics in 1940 to one of Wills' old fiddle standards.

"Little bee sucks the blossom, big bee gets the honey.
Darkie picks the cotton, white man gets the money."

"Bangladeshi sews the cotton.
GAP gets the money."

For this version, Merle faced off with versatile band stalwart Joss for a smoking fiddle breakdown as Hamlet soared on pedal steel, as he did on the clap-along breakdown which followed. "We love you," a fan shouted as the tune ended.

Topping off the set was the anti-hippie anthem "Okie From Muskogee" Merle informed us that "This song is about marijuana. It was written 47 years ago." Sadly, "It's All Going To Pot," a contemporary duet with Willie Nelson, was not performed:

"Well, it's all going to pot
Whether we like it or not
The best I can tell
The world's gone to hell
And we're all gonna miss it a lot"

The closing number, another breakdown, was punctuated by thanks from Merle and accompanied by hand clapping from the enthusiastic audience. As there was no encore, the crowd headed for the exits, perhaps wishing Bob Wills could be there to drawl: