Merle Haggard at the NYCB Theatre at Westbury 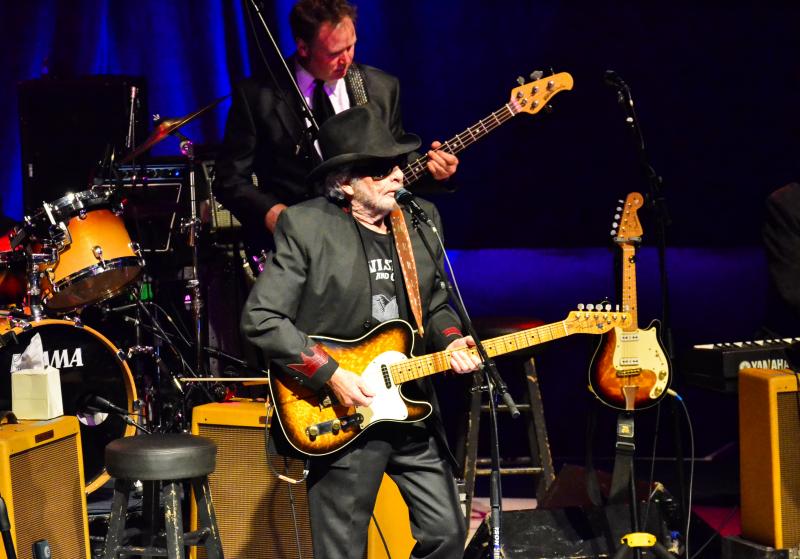 Merle Haggard is a true American original. The multiple-time Grammy Award winner (for Best Country Vocal Performance in 1984, Best Country Collaboration with Vocals in 1998 and the recipient of the 1999 Grammy Hall of Fame award) is also a member of the Country Music Hall of Fame and the Oklahoma Music Hall Of Fame. Merle Ronald Haggard, who is now in his late-70s (he was born outside of Bakersfield, CA on April 6, 1937), is credited with helping create the Bakersfield sound—a rougher country style that differs from the polished Nashville sound (that originally defined country music) due to the electric guitar twang that mixed with traditional steel guitar and an economical vocal and lyrical delivery. Haggard is also a member in good standing of the outlaw country movement.

His early life wasn't easy. His father died of a brain hemorrhage in 1945. During his teens he had a number of scrapes with the law for minor offences, such as petty theft and writing bad checks. Haggard was sent to a number of juvenile detention centers from which he often escaped. He eventually wound up in the Preston School of Industry, a high-security installation. After he earned his release, Haggard attended a Lefty Frizzell concert. Somehow he got backstage. Frizzell heard Haggard sing and refused to perform unless Haggard would be allowed to sing first. Haggard's performance was a hit with the audience and as a result he decided to pursue a career in music. While working as a farmhand or in the nearby oil fields, he played in nightclubs and in 1956, he landed a spot on a local California television show called Chuck Wagon.

In 1957, Haggard was experiencing financial strife. In, what has been described as, an effort to feed his family, Haggard tried to rob a Bakersfield, CA roadhouse. He was arrested and sent to Bakersfield Jail. Following an escape attempt he found himself in San Quentin Prison. In San Quentin, Haggard encountered many characters including Caryl Chessman, an author and death row inmate as well as another inmate nicknamed "Rabbit." "Rabbit" eventually escaped and while on the lam, shot a police officer. "Rabbit" was returned to San Quentin for execution. Chessman and "Rabbit's" situations inspired Haggard to change his life for the better. He earned a high school equivalency diploma, worked in the prison's textile plant, saw Johnny Cash perform at the prison and joined the prison's country music band. Haggard was released in 1960. He has been quoted as saying that it took about four months to get used to being out of jail and that there were times that he thought he'd be better off if he was still in prison.

After his release, Haggard went to work for his brother and began to perform again. Soon he was recording for Tally Records. In 1964, Haggard recorded Wynn Stewart's "Sing A Sad Song" and had a national hit with the release. The next year he released "(My Friends Are Gonna Be) Strangers" and scored a Top 10 hit single.

In 1967, Haggard released Branded Man (Capitol Records). The album hit number 1 on the U.S. country music charts and was the beginning of Haggard's hot streak of Top 10 country albums. By 1976, Haggard was a bona fide superstar. During that year he released three albums on Capitol Records (It's All in the Movies, My Love Affair With Trains and The Roots of My Raising). All went to Top 10 on the Billboard country albums chart.

In 1977 Haggard moved from Capitol Records to MCA Records and released his twenty-fifth album Ramblin' Fever. It reached number 5 on the country music charts.

Over the years, Haggard has collaborated with some of the biggest names in the music business. In 1966, his first duet album, Just Between the Two of Us (Capitol Records) was released. His singing partner was Bonnie Owens (who at the time was the better known country artist)> Owens would also become his wife and sing background on a number of his hit songs. In 1982, Haggard released A Taste of Yesterday's Wine (Epic Records) with George Jones. Haggard collaborated with his then wife Leona Williams on Heart to Heart released on Mercury Records in 1983. What is most arguably Haggard's best known duets album Pancho and Lefty with Willie Nelson was released in 1983 on Epic Records. Nelson and Haggard followed that with 1987's Walking the Line with George Jones, (Epic Records), Seashores of Old Mexico (Epic Records, 1987) and 2007's Last Of The Breed, recorded with Ray Price (Lost Highway). In 1994, Haggard collaborated with Asleep at the Wheel and many other artists on Tribute To The Music Of Bob Wills And The Texas Playboys (Liberty/Capitol). In June of 2015 Nelson and Haggard released Django and Jimmie (Legacy Records) which as of this writing held the number 1 spot on the U.S. Billboard country music charts as well as the number 7 position on the Billboard Top 200.

In the early 1970s, Ronald Reagan, who at the time was the governor of California, granted Haggard a full pardon and expunged his criminal record. In 1981, Haggard published an autobiography, Sing Me Back Home (Times Books). Over the course of his career Haggard has scored 38 number 1 singles on the U.S. country music charts. In 1988 he released his last number one hit single—"Twinkle Twinkle Lucky Star" which also appeared on Chill Factor (Epic Records, 1987).

On the last Friday in June 2015, Haggard and his band, the Strangers, offered up a tour de force performance at Long Island's cozy NYCB Theatre at Westbury. The evening was a definite family affair as the opening act was his son Merle Lee Haggard who announced himself with a very simple, "Hi everybody, my name is Merle Lee Haggard. I'm the youngest of the first litter. We're going to perform for about fifteen or twenty minutes and then the main show will start." Merle Lee's performance was an excellent warm-up for his father. It was highlighted by the country classics "Stop The World (And Let Me Off)" by Waylon Jennings, Johnny Cash's "Bad News," Kris Kristofferson's "Chase The Feeling" and his father's "Dealing With The Devil."

After Merle Lee left the stage, the lights came up for a short time but soon dimmed. The band then came on stage and began to play and Merle Ronald Haggard descended to the stage sporting his glasses and trademark cowboy hat. The crowd responded to his entrance with a standing ovation. Haggard came to the front of the stage, removed his hat and took a bow.

Dressed all in black (jacket, pants and t-shirt), Haggard opened with "Big City," and proceeded to take the audience on a trip down memory lane as he and the Strangers ripped through a muscular set that included Johnny Cash's Fulson Prison Blues," with numerous stops along the way for some of his greatest lifeworks including: "Silver Wings," and "Workin' Man Blues." Though Haggard didn't talk much, when he did it was pure gold. He addressed the crowd toward the beginning of the show stating, "My name is Merle Haggard and these are all the Strangers on stage. Nice to be here." When the crowd, who hung on his every word, erupted, Haggard humbly said, "Thank you very much." He then resumed his career retrospective performance with "Mama Tried," "The Bottle Let Me Down" and "That's The Way Love Goes," among others.

When he decided to address the crowd again, he did it with a sly smirk on his face and what must have been a twinkle in his eyes behind those glasses. Haggard said, "This is a new song off the Merle Haggard/Willie Nelson CD. Willie said he'd show up. He's not here. 'Course I told him that I'd be a lot of places that I didn't show up to either. This one is called 'Unfair Weather Friend.'" The band then delivered a letter perfect version of the song from the Django and Jimmie CD.

The hits resumed with "I'm A Lonesome Fugitive" followed by "Honky Tonk Night Time Man" (which was introduced as "a song Lynyrd Skynyrd recorded some years ago."), "Twinkle Twinkle Lucky Star," and "I Think I'll Just Stay Here and Drink." He performed the slow and plaintive "If I Could Fly" and took a breather during which he introduced the Strangers. The top-notch group included his bandleader son, Ben, and his back-up singer wife, Theresa. He then led the band through the cover of Townes Van Zant's "Pancho and Lefty." He took another moment before his final few songs to announce that his was "the only band I know that carries nurses rather than roadies. We're one of the oldest bands in existence. We've been around since 1965. We're going to do a song for all the soldiers fighting for us all over the world. We could do a song for all the politicians, but it wouldn't be nice." The band then played a spirited version of "The Fightin' Side of Me." Next, he grabbed his fiddle and led the band through an instrumental before delivering a fantastic version of "Kern River" from the 1985 Epic Records album of the same name.

Though he didn't do an encore, per se, he did take one final moment to address the crowd. He said, "This next number that we're going to do is about marijuana." This statement was met with thunderous applause. Haggard, stopped and slowly surveyed the crowd and smiled when he said, "I didn't say we were going to give you some." The crowd cheered, whistled and roared with laughter. He then proceeded to close the show with "Okie From Muskogee." While the audience gave him a standing ovation, he took a bow waved his thanks and faded behind the curtains to the backstage area.

When a musician of iconic stature advances in age, a number of questions are often asked. Can he still do it? Has his voice held up? Will the grind of a tour affect him? Can an almost octogenarian remain relevant and perform a grueling concert? These questions were answered and then some on this pleasant Friday evening. The answer was a resounding "Hell Yeah!"