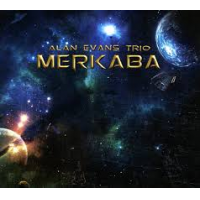 Anyone who mistakenly thought Alan Evans was (or was going to be) Soulive lite is going to be more than pleasantly surprised in hearing the threesome's sophomore recording. Before the opening cut "Thor" is thirty-seconds in, the band displays a depth and reach far in advance of its predecessor.

Not that AET isn't stylistically similar to its 'parent' group or its debut album. But while cuts like "Gone" and "Biscuits" work similarly funky syncopations with Beau Sasser's Hammond organ swirling in and out of the mix, the tracks evince a tougher guitar sound that imbues the music with a different personality, i.e. that of the bandleader.

In true Renaissance man mold, Alan Evans wrote all the material on Merkaba, as well as recording, mixing and producing the album (not to mention creating the artwork). He also plays guitar and bass guitar on the majority of the ten tracks here, in addition to supplying his customarily hard-hitting drumwork. Singing on "Life Is Harder to Live," the silky tones of his voice recall Curtis Mayfield in the sultry warmth they radiate; it's an effect reinforced by the repetition of the title as the sounds of a fretboard ricochet behind it, supplied in part by guitarist Danny Mayer.

The moniker of the Playonbrother (home) Studios where this album was done is particularly appropriate in its reference to Jimi Hendrix. The hard funk rock underpinned by pulsing bass in the likes of "Cosmic Hazel Dust" is directly descendant of the late rock icon's latter-day music, in particular The Band of Gypsys, and The Alan Evans Trio does justice to the hallowed but short-lived three piece, precisely by avoiding mere imitation.

And that includes demonstrating dynamics the likes of which go on display in the slightly tongue-in-cheek "They Call Me Velvet." It's notable the track sequencing for the vinyl version of Merkaba differs from the CD, but, regardless, the economy of each successive cut regenerates its own momentum, vis a vis the chopping rhythms and Farfisa-like keyboard sounds of "Have You Seen Him."

Incorporating acoustic guitar, emotive falsetto singing, rubbery rhythms and more fluid Hammond organ, "Givin' to You" almost seems intended as a summary of The Alan Evans Trio's eclectic approach. Merkaba confirms not only how well-ensconced within their influences is the band, but also how it refuses to be bound by them.

Thor; Gone; Life Is Harder To Live; Cosmic Hazel Dust; Who Dare Knock; They Call Me Velvet; Have You Seen Him; Hotcakes Meltdown; Biscuits; Givin' To You.