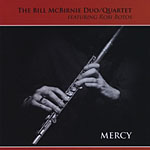 By its very nature and high and lonesome sound, the flute is a solitary instrument. Although played from ancient times, the modern flute as a solo voice has been rather seldom heard compared to other woodwind—especially reed—instruments. But non-existent it is certainly not. First Frank Wess then Herbie Mann and Hubert Laws work certainly comes to mind. In Canada the instrument has been a part of the fine tradition that owes much to Moe Koffman, and lately the maestro, Bill McBirnie. The flutist's self-produced Mercy is a true gem.

The record comprises a series of duo and quartet recordings—duets mostly featuring the unbridled talent of a young Romani pianist from Toronto, Robi Botos, and quartets with Botos, the celebrated bassist Pat Collins and drummer John Sumner, both first call musicians from the Toronto and West Coast circuits. But mostly it is McBirnie who takes a stellar turn throughout, sharing the spot with Botos, who is also flawless in his understated elegance and thoughtful playing. The repertoire on the album consists of beautifully chosen charts that highlight the flutist's skill in the idioms of jazz and Latin music. While the music is rendered with little fuss, it is wonderfully adorned by both McBirnie and Botos.

Ann Ronell's "Willow Weep For Me," a track that was made his own by the great Art Tatum is rendered in an exceedingly moving manner by McBirnie in conversation with Botos. It is as if both musicians "cry" in turn for some lost love—Botos' breaks are as memorable as McBirnie's great flights of emotional fantasy. On "Yardbird Suite" the credits are much the same, with McBirnie and Botos playing opposites in a similar vein to that which Charlie Parker and Bud Powell once did. "Stuffy Turkey," a Thelonious Monk original, finds Botos in an expansive mood as he navigates the angular melody in inimitable fashion.

Botos is a singular pianist who echoes almost no one though he may have heard Tommy Flanagan and Herbie Hancock. His playing, however, is of his own invention. His solos proceed slowly as he interweaves delicate harmony into the melodies that remain only vaguely familiar as they morph into fluttering songs quite his own. Luis Bonfa's "Gentle Rain" and John Coltrane "Moment's Notice" are two of the finest Botos solos committed to record. His playing with McBirnie—especially on his own composition, "Mercy"—is also exceedingly beautiful.

McBirnie, however, is the record's hero. In a relatively unassuming manner he has recast the way the flute is played. His breathing is easy and sustained and his control over that narrow shaft of air is complete. Moreover he is one of the most creative flutists—a true inheritor of the great tradition created by Canadian masters including Koffman and Jane Bunnett, the Irishman James Galway, and the French master, Jean-Pierre Rampal.

Mercy is a record that flows in gorgeous rivers of sound and one that defines how the modern flute is played.