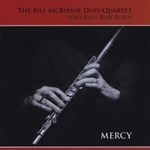 Bill McBirnie is an award-winning flutist, based in Toronto, Canada and Mercy is the fourth release on his own independent label, Extreme Flute. The album is divided into two parts with a quartet performing on seven songs, and a duo, featuring McBirnie and pianist Robi Botos, covering five songs. The liner notes indicate the project was recorded over two days in the summer of 2009, with the quartet performing on day one and the duo the following day. The quartet includes Botos, and is rounded out by a solid rhythm section, featuring bassist Pat Collins and drummer John Sumner. The result is technical magnificence.

McBirnie is one of the best living jazz flautists in the world, while Botos is an award-winning pianist, and one of the strongest jazz piano players on the scene. Together they have produced a power-packed album that high lights their virtuosic talents. Technically stunning musicianship is offset by powerful emotions that combine grace and beauty, providing for a bountiful feast of audio delight.

The first two tracks are dedicated to Hubert Laws and Jeremy Steig: Laws' "Baila Cinderella," and Ann Ronell's "Willow Weep For Me," which Steig played on Flute Fever , his 1963 Columbia debut. Laws and Steig have set a high standard for jazz flute and, as McBirnie states, "These are the two musicians who have exerted the greatest influence on me."

The album is a mix of styles: a blend of swing, Latin, bebop and Dixieland. The predominant feel is bebop, with Latin overtones, a genre at which McBirnie excels, while Botos is a master of bop in all its idioms. The balladic duet, "Gentle Rain," with its hint of bossa nova, is a beautiful journey through an enchanted garden of piano and flute, with sumptuous tones that cascade in elegant splendor. Mercy concludes in slow rhapsody with Botos' elegant original, "Mercy."