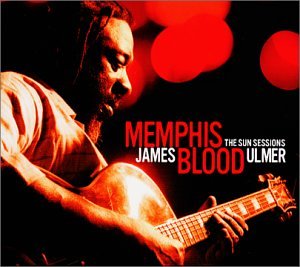 Memphis Blood could very possibly be as historic a recording as Howlin' Wolf's Evil .

Everything about this release is Romantic. The music ranges from some of the earliest recorded blues for the 1920s to novelty tunes from the '50s and '60s. The recording venue is perhaps the most famous ever, the home of seminal recordings by Johnny Cash, Carl Perkins, Jerry Lee Lewis, Howlin' Wolf, and Ike Turner, not to mention Elvis Presley. The universal concept of man reckoning with his past is pregnant with the water breaking on Memphis Blood. James Blood Ulmer, that harmolodic guru of the free jazz guitar on the cutting edge, entered Sun Recording Studios in Memphis Tennessee, sat down in front of the microphone and expelled a thoroughly original and personal musical vision through 14 humidly organic examples of the American blues canon.

The 59-year-old Ulmer, a native of St. Matthew's South Carolina, began his rather odd musical journey playing guitar in funk bands in Pittsburgh and Columbus, Ohio during the 1950s and '60s. He did a four-year stint in Detroit before moving to New York City in 1971. There, he was exposed briefly to Art Blakey before coming under the spell of Ornette Coleman, who's concept of harmolodics was to become Ulmer's focus for the next number of years. Ulmer has managed to make several notable recordings. Odyssey (Columbia 64934, 1983) and America: Do You Remember the Love? (Blue Note 46755, 1987) are important testaments in the free jazz movement. The 1990s found Ulmer becoming more structured and, according to critics, less interesting.

In 1998, Living Color guitarist Vernon Reid began pursuing Ulmer to record a blues album, something Ulmer had managed to avoid for the 40 years of his career. True that the blues has always been a part of his music, Ulmer had never addressed the genre directly. Reid claims his motivation for pursing Ulmer was that Ulmer possesses one of the great American blues voices. So, finally, on three stormy nights in April of this year, Reid cajoled Ulmer and his regular rhythm section of drummer Aubrey Dayle and bassist Mark Peterson into Sun Studios for a contemporary examination of the American blues vernacular.

The result is a multi-textured rendering of Delta Blues history. In all cases, James Blood Ulmer does have a great blues voice. Reminiscent of Howlin' Wolf, Charlie Patton, Son House and Blind Willie Johnson, Ulmer's voice is a force of nature, dwarfing the music that accompanies it, even on the steamroller wah-wah arrangement of "I Asked for Water (She Gave Me Gasoline)". Propelled by the dual guitar of Ulmer and Reid with fuel from harmonica player David Barnes and organist Rick Steff, Ulmer almost explodes, channeling the sweating spirit of Chester Burnett straight through to the 21st Century. "I Asked for Water" is an eight-minute tour-de-force that lays waste to all other efforts currently available in the blues genre. And it is not even the centerpiece of the disc. That would most certainly be the nine-minute "Death Letter", son House's corrosive epistle to a dead lover. Paced almost as a shuffle, Ulmer sings with an angry resignation and a death-rattle vibrato that is as eerie as it is direct.

Ulmer's vocals and guitar playing recall the ragged styles of Muddy Waters and John Lee Hooker. They are violently juxtaposed against the cutting edge playing and production conjured up by producer/guitarist Reid. On "Spoonful" a powerful groove is evoked out of the probing tremolo of Ulmer's Gibson. "I Just Want to Make Love to You" honors Muddy Waters with its fundamental sexuality while scorning Foghat for even attempting to play the song. The majority of songs were cut live with no overdubs and vocals recorded the same time as the arrangement, i.e., live. This method makes for a heady brew of surprises and moments truly sublime. Memphis Blood is as real as it gets, kicking sand in the face of all of the Robert Crays and Kenny Neals trying to play the blues.

Spoonful; I Want To Be Loved; Little Red Rooster; Dimples; I Just Want To Make Love To You; Evil; Death Letter; Fattening Frogs For Snakes; Money; I Love The Life I Live; Too Lazy To Work, Too Nervous To Steal; Double Trouble; I Asked For Water; Back Door Man. (Total Time: 59:24)