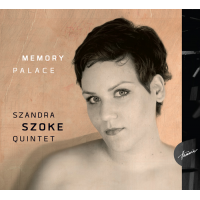 Memory Palace is the hugely enjoyable debut recording from the Szandra Szoke Quintet, a Hungarian group led by a young vocalist and writer with a talent for both composition and performance.

Szoke and pianist Gabor Cseke co-wrote the music to all but one of the songs on Memory Palace with the singer contributing the lyrics to six of the nine tracks. Szoke has a talent for writing lyrics (in English) that are filled with imaginative imagery and enough ambiguity to maintain an air of mystery in many of her stories.

At first, on "Monochrome," Szoke's voice is fragile, almost hesitant—situated rather deep in the mix, at times it's almost overwhelmed by Csaba Pusztai 's drums. The fragility suits the story and the storyteller—"These are times when my breath freezes." Halfway through "Wanderlust" another side of Szoke emerges—her voice grows in confidence and power as it flies into its upper register.

Istvan Fekete's muted trumpet is the perfect partner for Szoke's voice, echoing her singing and reflecting the moods and emotions of each narrative. Cseke's piano acts as a counterpoint to the trumpet and voice—he's a more dramatic player, crafting impressively rapid-fire single note runs and strong, rhythmic, chord patterns. Bassist Peter Olah partners Pusztai in the band's reliable rhythm section and also takes on a front-line role in one or two songs. Szoke and the bassist perform "Gyémánt" (written by Gyorgy Pribil and Peter Novak, originally recorded by Hungarian band Kimnowak) as a duet, Olah's strong, funky, groove contrasting with Szoke's gentle vocal.

The original songs are filled with striking lyrical imagery and atmospheric music. Three of these originals are especially impressive. "This tune is the sum of what I've become," sings Szoke on "Memory Palace," Cseke's fluid, pretty, piano lines contrasting with the dark-edged and enigmatic lyric. "Wool" takes musical inspiration from folk traditions as well as contemporary jazz: Pustai's percussion is central to the song's somewhat mystical air. Lyrically it resembles the changeling ballads of Scotland, imagination replacing sorcery, as Szoke asks a lover (or a would-be lover, or an ex...) how they think of her—like wood, like smoke, like wool, "like the sky,... galaxies born in my eyes"?

The sultry "In Between The Lines" shifts between its waltz time opening and sections in 7/4 and 4/4, echoing changes in the narrative and in the intensity of Szoke's vocal. It's a superb coming together of music and lyrics, of voice and instrumentalists. Memory Palace ends on another high note. On "Now Sleeps"—lyrics from Alfred, Lord Tennyson's sonnet "Now Sleeps The Crimson Petal"—Szoke's voice is at its purest, accompanied only by Cseke's gentle piano phrases. 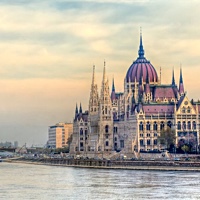