By JAKOB BAEKGAARD
August 25, 2014
Sign in to view read count 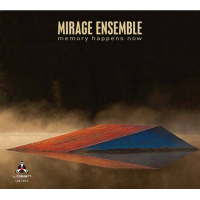 One of the things that is worth noticing about the new generation of jazz musicians in Norway is how they seamlessly combine genres and create their own expression. Of course, blending genres has been a part of jazz music almost since the beginning, but jazz has also become an idiom of its own with certain conventions: solos, swing, standards and not least improvisation.

Like much post-modern jazz, Mirage Ensemble challenges these conventions, but the musicians keep in touch with the essential credo of jazz as the sound of surprise. The compositions on their album Memory Happens Now are musical metamorphoses that incorporate different genre codes. For instance, guitarist Marius Igland changes between sophisticated chord progressions, single-line patterns, mournful slide guitar and distorted power chords.

Bassist Steinar Glas is a master of the groove. In the midst of the many changes in tempi, he keeps a fluent, funky groove that anchors the compositions together with drummer Jens Nyland's propulsive rhythms.

Another asset in the band is the brass section with trumpet, trombone and saxophone. They can play with the exhilaration of a brass band street march and the punch of a big band, but there's also room for quiet contemplation on a fluorescent ballad like "Pursuit of the Ideal" where saxophonist Joakim Bergsrønnning's cool, spacious tone has a hint of Norway's iconic saxophonist Jan Garbarek, but Bergsrønning also plays with fire in his belly on "Valuing the Sacred" where he delivers a heated solo.

While it would be relevant to sum up the qualities of each musician in this talented ensemble, individual excursions isn't really the point of this group whose aesthetic relies on group improvisation, rather than long individual solos. Together they create a kind of Nordic fusion whose changing rhythms and melodies are graced by an invisible tranquility that balances the exploratory nature of the compositions. A swinging smokescreen and musical mirage worth hearing.